The three day weekend was a two day weekend for me which is fine. Basically the holiday just ensured I got two days off. I used those two days to catch up on my DIY projects started while I was laid off. I worked on the front porch and I also worked on my garage. Let me set the stage for you a bit because I've never done a tour of my garage/workshop area. A ten by fourteen greenhouse connects the house to my three and a 1/3 bay garage. That greenhouse is half laundry center and half my mess/sportster storage. The bay closest to the greenhouse is walled off, insulated and heated and has no overhead door. The only access is from the greenhouse or a walk in door from the other two stalls of the garage. On the other end is the 1/3 stall which was only accessible from outside till I punched an opening in it to connect it to the two bays. I now call it my parts room. Parts of projects never finished. The garage and parts room are exposed stud walls with no insulation. 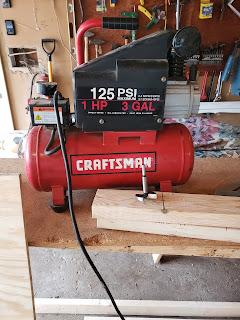 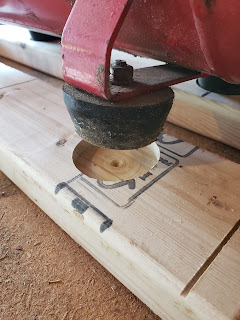 What I want to do is transform that shack I call a garage into something respectable. Theres a lot of oddball stuff that needs to happen before insulation and walls go up like straightening out some electrical issues. One of the garage door openers was on an extension cord. The other had an outlet near it but that outlet was basically an extension cord and plugged into another outlet. I take no responsibility for creating that situation but I also never did anything in over two decades to fix it. I also had a drop light hanging from the rafters in the parts room that had to be plugged in every time I wanted to use it. That one was my fault and I just never got around to fixing it. I remedied all those issues and also added power in the rafters for a light and air compressor. Those are on their own switch so I can just leave the compressor turned on but it wont run till I throw the switch which is convenient considering it will be in the attic. 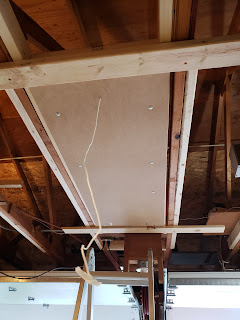 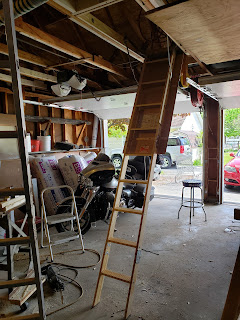 Speaking of the attic, I needed a way to get up there once the ceiling is installed so I picked up an attic ladder. I chose a central location that will be accessible even if two vehicles are parked in the garage and installation went pretty well despite the directions clearly calling for two people to hang it. Ya there was some grunting and cussing but that stuff just helps with that extra oomph needed to lift it in place. The satisfaction factor doubles when you shortcut the directions and still end up successful with no visits to the ER. 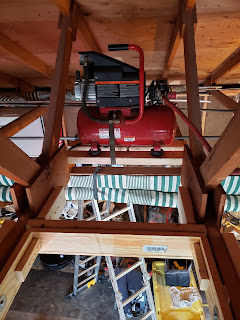 There are a lot of things to do besides just insulating the walls. I bought floor paint. Just the thought of getting everything off the floor for paint kinda makes me woozy. The rustoleum rock solid kit I bought is a two part epoxy that comes in sealed bags. The thought of trying to mix only half of it and then paint half the floor makes me even more woozier so I'll do what I can to get everything out of there including the big ass work bench. I envision a lot of crap hanging from the ceiling.
Other things to plan for are decent lighting, tunes cuz I gotta have my jams, storage and what to hang on the walls.
I'll just keep picking away at it a little at a time.
Later.
Posted by Scott Seidl at 5:35 AM