I guess I'm not the only one in our house with a sense of humor. My wife sets this on the table in front of me and says (almost without giggling)
"Looks like we have two Scotts in the house. Ass wipe and Asshole". 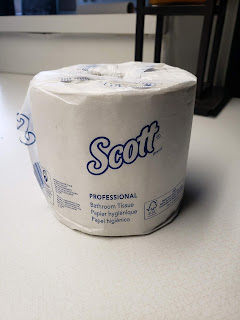 The boss and I did another automower install yesterday. We'll be pushing the limits on the size of the property but I feel good about it due to the simple layout. Also this customer is already familiar with its capabilities and what to expect from an automower due to his involvement with some units where he works. The units are being watched and a lot of people seem to have needed to see them run for a season before making a commitment.
I guess there must not be many installers in our area because today we have one scheduled in Appleton and I'm currently working on a quote for one north of Green Bay. Thats an hour and a half one way. We'll work the travel time into the quote. Makes no difference to my paycheck if I'm installing a mower or doing windshield time.
My mower at home has been doing a good job. 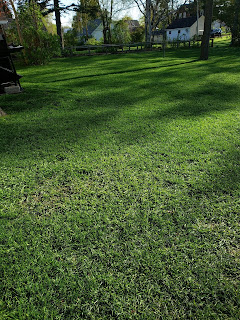 The lawn still needs some work but I like the green carpet look without any stripes or other evidence of a lawn mower. I don't want to jinx myself but Mowby Dick has run flawlessly all spring with no intervention at all from me. Sure I'll play with the settings and then watch it work for a few cans of beer but thats just for my benefit as an installer. While its true these things mow in a random pattern, theres nothing random about the way it takes care of an area before moving on to the next section. My mid and front lawn is broken into small sections and narrow passages and this thing really has it mapped out and under control. For three days I had a physical barrier up so the machine couldn't get out front while we had garbage stacked at the curb for bulk pickup day. I did that because the neighbor told me last year a garbage picker was eyeballing the mower, thinking it might be junk. Anyway, once I removed the barrier the automower took advantage and spent two days cleaning up the area before returning to the back yard.
I know some people say they like mowing the lawn but I'm pretty sure thats an excuse to not be doing something else. They'd rather be fishing or whatever. I know I've found better things to do with my time even if its relaxing while I watch the mower work. Its like the people that lose at the casino and walk out claiming they had a good time. Bullshit.

Email ThisBlogThis!Share to TwitterShare to FacebookShare to Pinterest
Labels: automower