Finding material for this blog can sometimes be difficult but I suppose anytime you drop a grand on tires its worth talking about. In truck terms $1000 isn't much for decent tires but I don't own a truck. I own a wannabe truck that takes the shape of a big ass station wagon. Actually I've been really happy with the Yukon XL and should have bought one of these a long time ago.

Two years ago I put a 3.5" lift on the Yukon. It took that long for the tires to wear out and now it was finally due for new skins. Originally I was looking at a mud terrain tire. Partially to deal with deep snow and partially cuz they look bad ass. The practical side of me knew mud terrains weren't a wise choice but I kept on pricing them. I was considering a low cost set of tires that would not have lasted very long but would have been "cool". Along with cool you usually get noisy, hard to balance and poor handling.

I said deep snow earlier. I plow snow at work and I have to drive twenty miles to get there, If I'm doing that at 1am then theres a fair chance the roads are crap. Many times the county has pulled the plow trucks earlier in the evening and I still have to figure out how to get there without ditching it. One tow truck call could easily cost more than the difference in price between cheap tires and decent ones.

There are a few tires out there I've always wanted to try. BFG mud terrains are one of them and I put some on that blue Dodge I had last. They were good from a traction standpoint but were noisy and handled crappy. Cooper Discoverer STT is another tire I want to try but I couldn't find the right size for the big ass station wagon. The General Grabber ATX is something I've seen around and when possible I've asked the owners how they like 'em. I always got a positive answer so when our local tire distributor said he could get them for the same price as the best internet price I found, well I said ok. 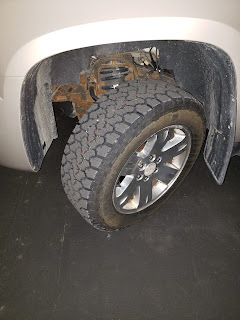 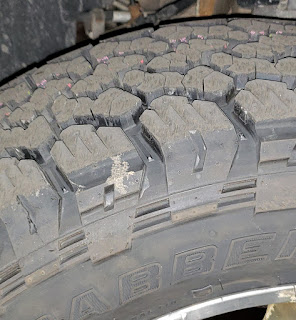 James and I mounted the tires last Saturday. They balanced well without too much weight needed. They handle well on the road and are only slightly noisy. Actually the most noise I heard was when one of the front tires was rubbing on my mud flap. I went one size taller than stock and had to take an angle grinder with sanding disc to that mud flap. All is better now. With a 60,000 mile rating and an aggressive all terrain tread pattern I think I'll be happy with these tires.

I seem to get more practical as I age. I'm not sure if I'm ok with that but we'll just roll with it for a while and see how it plays out.