Speed bar is a pretty general term that I suppose could conjure up different images if you don't actually know what a speed bar is. If I say speeder drive handle instead then some may catch on to what I'm referring. Still in the dark? A speed bar is a socket drive tool designed for high speed, low torque operations. Its shaped like a crank and requires two hands to operate. They work fine but in these days of battery powered tools I doubt you'll see many techs actually using one. 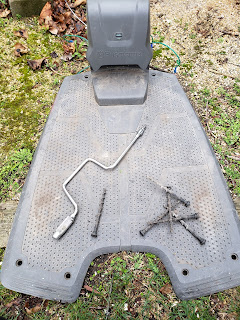 I recently rediscovered the speed bar while installing my automower this spring. Those long course plastic screws hold the charging pad down to the ground and it turns out a speed bar is the perfect tool for the job. A power tool can easily "strip" the screw in the soil and prevent the screw from holding. The speed bar is as sensitive as your touch and you'd have to purposely overtighten to run into problems. A power tool needs a battery and of course is expensive to leave dedicated to an install kit that doesn't get used every day. Speed bars are like unwanted step children and can be found most anywhere neglected tools gather, and they don't need a battery. 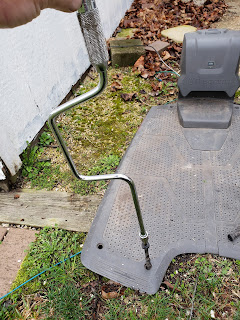 So there you go. I'm happy to get a speed bar out of my tool box where it was just taking up space and keep it in my mobile automower kit where it will actually be used. Take a look in your tool box at those unused tools. You just might find a new purpose for some of them.

Posted by Scott Seidl at 5:52 AM No comments:

Todays video takes a look at an old lawn mower blade balancer that my grandfather had. Ya know, I like to update these reviews every 50 years or so and this one is overdue. I didn't have a camera the first time I saw this tool but it and its owner did leave a lasting impression on me. 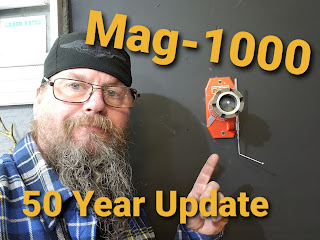 Posted by Scott Seidl at 7:18 AM No comments:

A long time ago my wifes sister Brooke decided she was gonna hide a bunch of Easter eggs in my shop. I was still finding eggs three years later and because of the amount of cleaning and reorganizing I've done here I'm sure I eventually found all of them. This year she did it again but this time she told me that she hid 19 eggs. These are plastic eggs with candy or surprises hidden inside. Thanks Brooke! One of them contained a tasty little treat and after eating it I decided I wanted more. I did find more eggs and some of them had those same candies in them. Yum. Not sure what they are called but they appear in the blue and pink eggs in this pic. 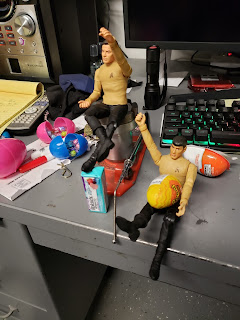 I'm up to 16 eggs. There are three more hidden in my shop and theres a chance they contain that magic treat. I can't waste time typing, I need to find those eggs!

Posted by Scott Seidl at 5:37 AM No comments:

My Most Used Tools

No not the ones that are beat up the most. Todays video is about my most commonly used tools for chainsaw repair.

Posted by Scott Seidl at 7:24 AM No comments:

An ice cold Bud. That must be what I was thinking of at work yesterday when I emailed a customer. Let me back up a bit. The other day we looked at a property for an Automower install. The customer is very interested and said he wants to move forward but needed the quote firmed up and put in writing. No problem, I handed him my clipboard and he wrote down his email addy. My bad for not looking at it when he handed it back to me.

The next day I wrote up the quote and opened my email account to send it. The address was joe schmoe or whoever @ icbud.com.  icbud? Icy Bud? Is this a gag? Was he not really interested and just gave me a bogus email to throw me off? I tried sending the quote to his Icy Bud account but it got returned. Eventually I called and left a message that I was getting his addy wrong and could he please call back to straighten me out. When he called I was with another customer so a coworker took down the new address. When she handed me the piece of paper with the correct address on it I just started laughing. It was joe schmoe or whoever @ icloud.com. If you just bump that L a little to the right till it hits the O then it sure looks like a b.

The guy is a doctor and you know what they say about doctors handwriting but I should have known a doctors email wasn't Icy Bud. 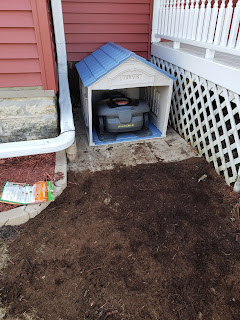 In other Automower news, yesterday we did our first install of the year. The family named the unit "Jarvis" and bought a dog house for him to charge in. The dog house was a bit of a challenge but only because of the limited space to work in. While there is no grass long enough to cut yet, Jarvis did move successfully around the yard and obey all the commands the owner sent him. We don't usually have to make a return visit to fix anything and I don't see why this install should be any different. I'm looking forward to the two more installs we have scheduled and hope this year isn't a bust for Automower sales like last year was.

Posted by Scott Seidl at 5:28 AM No comments:

If you followed along last summer then you know I gave my garage a makeover. This included painting the floor and todays video post is an update on just how well that paint is holding up to Wisconsin winter salt and grit. 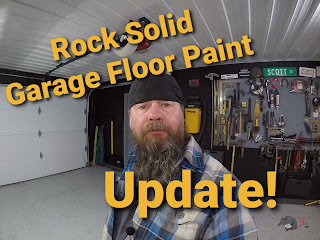 Posted by Scott Seidl at 6:43 AM No comments:

People are weird.  Why do I get so many people calling my place of employment asking for me to diagnose their problems over the phone? They have to know we repair equipment or they wouldn't be calling for advice. Do they not realize that our employer is paying us to be there? We aren't a government agency funded by taxpayers or a charitable organization. Somehow we need to bring in some coin and free phone tips ain't the way. Some people even have the balls to show up in person, sneak in the back door of the shop and ask for advice. WTF? I don't care if you bought the equipment from us because we don't make squat on most sales. Its the service after the sale that makes money and some people think that should be free. I'm not talking about walking someone through regular maintenance procedures, I'm talking about the guy with an out of warranty machine that he can't get started and has begun tearing into it.

My goal has been to offer so many possibilities and specialized procedures that they have to bring it in. Does that make me a dick? No, I don't think so. My reasoning is that a simple fix of the symptom isn't always the cure of the real problem. For example a carb adjustment may hide the fact that a chainsaw has an air leak. That air leak will eventually, or may have already, lead to a scored cylinder. When it pukes I'll be the asshole, I'm sure of it. 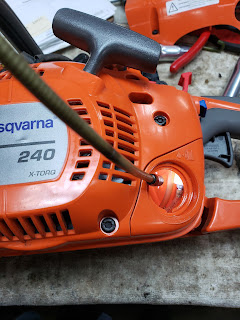 Another reason is terminology. If they knew everything I was talking about they wouldn't need me. "It doesn't turn over" so I ask if it does anything at all like click when you turn the key. "Turning the key spins the motor but it doesn't crank".  Really I mean we don't have time for this crap. Turn over and crank both are referring to the motor spinning when the starter is engaged. What they meant was it won't start or run. I've seen this many times.

Heres my favorite. I ask when was the last time it ran and did it run well? They reply, "last fall but I put fresh gas in it". I ask what they did with the old gas? This is a trick question to get them to admit it still had gas in it. "I dumped it into blank". So it sat all winter with old fuel in it? "Ya but I put fresh gas in it". It doesn't work that way and when you say fresh gas do you mean gas still in a can from last year? I know not everyone is tech savvy but don't try to outwit me with your fresh gas bullshit. Justifying your actions that produced zero results is pointless.

How about this guy. I've told this story before. This guy has the balls to call and ask what spark plug his hedge trimmer needs. Hes standing in a parts store prepared to buy the spark plug from them but wasting my time trying to figure out what he needs. I'm not a total dick so I told him I would need the make and model but all he could offer me was the brand but they're all the same anyway. I had the chart for that brand handy and told him there were five choices. He asked for another coworker by name because he was the smartest one in the shop.

I hung up on him. He showed up at the shop later claiming I was rude. How did he not see how wrong his request was? I even tried to help his sorry ass. People are weird.