In this weeks edition of "Over The Bench" we look at the inside of a Husqvarna automower and swap out the main circuit board. 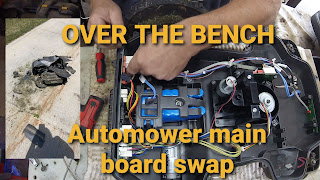 Bonus footage of Mowby Dick and also another machine that was crushed by a delivery truck.

Posted by Scott Seidl at 6:42 AM No comments:

If you know me or follow my blog then you know that late summer I've been taking a bike trip to the Smokey Mountains. Last year was cancelled because of the coof and a few days before departure this year we had to cancel due to severe weather that devastated the area with floods and mud slides. Basically the group just decided to each do our own thing and hope that we would be able to gather next year for our twentieth adventure together in the Smokey Mountains and on the Blue Ridge Parkway.

I've never been to the Sturgis rally so together with some new friends and old, we decided to set our GPS to Sturgis and head out on an adventure.

We hadn't been on the bikes long so when the voice on the gps said we'd arrived I was skeptical. Still we rode around town looking for adventure. I'm not sure what the draw is to Sturgis because I wasn't seeing it. We decided to raise a little hell anyway but being the only four bikes in town made it easy for the local PD to catch up with us. 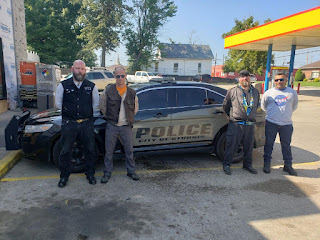 We sat the first two nights of our vacations in jail waiting to appear in front of the judge. When he found out we thought we were in Sturgis SD and not Sturgis KY he couldn't believe we were so stupid and gave us a break. Just like I can't believer you're buying any of what I wrote after the first paragraph :-)

The truth is we had a great time on the bikes that first day. Besides Sturgis one of our stops was Metropolis, home of Superman. See if you can pick him out in the photo. 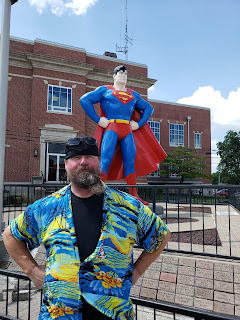 And a good time was had by all.

Posted by Scott Seidl at 7:11 AM No comments:

This video will take you on a tour of the drawers of my bottom tool box. We'll look at the most used and least used tool from each drawer. 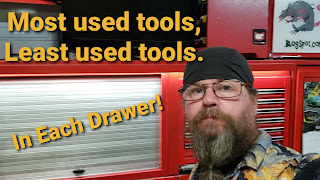 Posted by Scott Seidl at 6:34 AM No comments:

To know Mike is to know a man that prioritized church and family above all else. Mike worked hard to support the family and the farm but still found time for fun. Theres a time for each and he knew that. Strong work ethics came naturally and he set nothing but good examples.

If you needed something and he was able then he would help you. Thats the kind of man he was.

I looked up to Mike. I always thought that if I ever heard Mike was up to no good then my world would turn upside down. I'm not saying he was a saint but I am saying I respected him and if he did something then that was probably the right thing to do.

The last time I saw Mike we were playing cornhole at a celebration of life for another family member that had passed. My last words to him were probably something like "good game" because he kicked my ass. Mike did play a good game, sadly it was cut short when a truck pulled out in front of his motorcycle.

Times like this are tough on everyone. Not everybody handles these situations the same way. We all grieve in different ways. Be strong but take time to mourn.

Today we look at a Stihl 021 with the complaint that it just bogs and has not power. 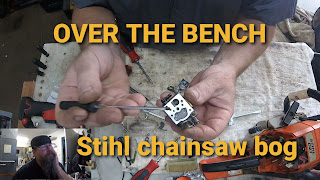 This is a common complaint and in this video we reveal one of the reasons this happens.

Posted by Scott Seidl at 7:15 AM No comments:

Ya its hot. I remember when I was a kid the summers always seemed really hot but as a kid it didn't really matter. I was doing kid stuff and if I got hot I found a way to cool off. As an adult working in a shop with the doors open and exposed to the full humidity of Wisconsins summer heat, it bothers me a bit. Theres a Shrek joke going around the shop. It has something to do with which swamp hes in or which swamp is in his pants. To make things worse, the showroom is air conditioned and there is a twentyish degree difference in temperature. The windows on the double doors separating the rooms is covered in fog that reminds us how well the other half lives.

Paperwork is a problem. Work orders that were once a crisp dry sheet are now more like a used napkin. That makes them difficult to write on. 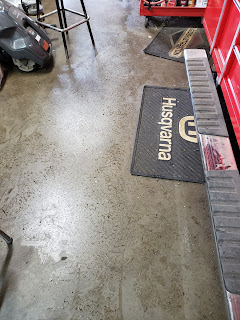 The floor in my work area has become a bit like a skating rink. There is water covering the entire floor and mixed with normal shop grease it is quite slippery. I suppose I should take a few minutes to oil down some of my tools because this is the time of year when they can rust.

Still, I'll take this heat over the cold every time.

Posted by Scott Seidl at 5:31 AM No comments:

This week in Over The Bench we'll look at why I removed grease gun privileges from one of my customers. Sometimes you think you're doing all the right things but in fact you're creating problems. 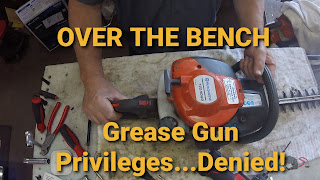 Posted by Scott Seidl at 7:36 AM No comments:

Backed Up With Saw Repairs

For those of you that aren't from around these parts you may not know that we had a storm last week. They say it wasn't a tornado but when you have trees down, buildings lost and crops flattened I guess it doesn't matter what you call it. The fact is that many people suffered a lot of loss.

The power was out at work all day. It came back on at 5pm as we were closing shop. We kept the store open on generator power and helped a lot of people with chainsaws and generators. We sold a lot of chains and also canned fuel because the gas stations were closed due to power outage.

Saw repairs were the big demand. Most people would get a five minute assessment of their saw problem and if we could get it going in a reasonable amount of time then we did. Some people didn't get their saws fixed. If we asked when was the last time it ran and the response was something like "the tornado of  '86", then we explained it wasn't happening today. Sure I could rush through a 1/2 hour tune up/carb rebuild but in that same half hour I could potentially help ten other people get back to work. 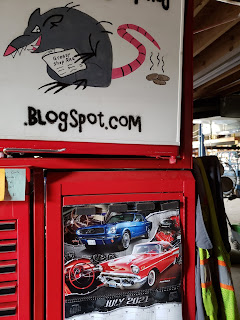 The saws keep coming in and we've added an additional staging area for incoming repairs. Yes I'm way behind but I'll catch up fast. I enjoy a challenge.

A coworker asked about a puddle forming under my toolbox. I saw it earlier but it didn't register that there might be a problem, I mean the roof leaked in a few spots so seeing the floor wet wasn't unusual. Closer examination revealed that my mini fridge was defrosting due to the power outage. This is a situation I had never considered and I'll have to get a drip pan in case this happens again.

It seems petty to even mention the fridge and my loss of two pudding cups and some applesauce but I don't say it as though I suffered a loss. I mention it because its toolbox related and something I didn't plan for. It just goes to show you that no matter how much you over analyze a situation there still can be things that escape you. 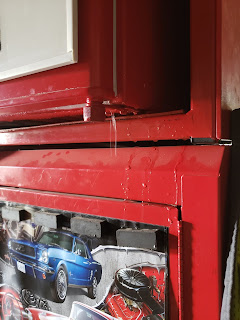 Later.
Posted by Scott Seidl at 5:29 AM No comments:

Over The Bench-Husky 36 Tune Up

A look at a fuel system overhaul on an old Husky 36 chainsaw. 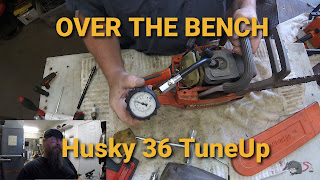 Posted by Scott Seidl at 7:02 AM No comments: