Yes this is a different post than the one from two weeks ago. I'm already wondering what I might name another LED toolbox lighting post. Still even more led lighting? More lighting with sprinkles? Anyway, this time I continue the second strip of lights into the triple rack. The results are not what I expected. 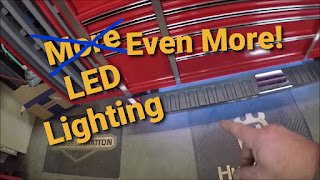 Posted by Scott Seidl at 6:38 AM No comments:

A Wednesday video? Don't sweat it, I'm not ready to make two videos a week on a regular basis...at least not yet. I just wanted to practice some more video editing and as this video will prove I need the practice. 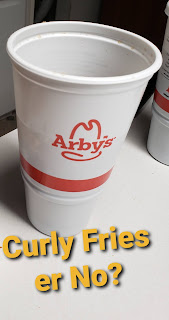 Posted by Scott Seidl at 1:33 AM No comments: 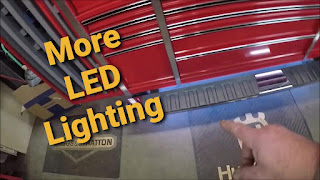 I'm undecided on how I like the results. You be the judge:

Posted by Scott Seidl at 4:24 AM No comments: 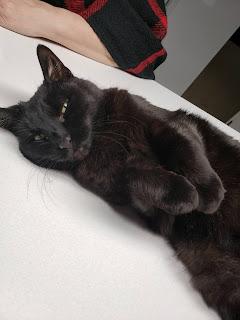 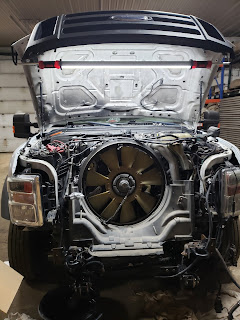 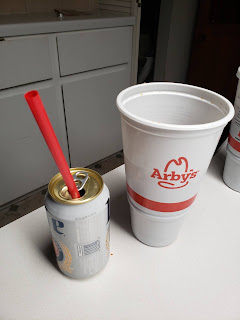 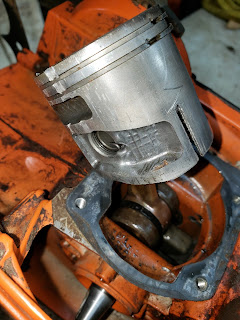 Posted by Scott Seidl at 5:35 AM No comments:

If you've been following the bed slide project then you may remember I promised to spice things up a bit for this video. Well if "spice" means me acting like a dork then thats exactly what you'll get.

Heres the deal. I downloaded a copy of Shotcut video editor and started playing around with it. The first thing I noticed was all the features I was missing out on by using the stock editor that came with windows. The second thing I noticed is that video editors require a lot from your computer. Theres nothing wrong with my laptop. It happily churns along on the internet, stores pics and edits video in the most basic way but when challenged to edit complex video it lags. When I say lag I mean an hour and 15 minutes to process this 16 minute video. Previews during editing are choppy and freeze and audio is wonky too. This all goes away after processing but getting there is a pain. 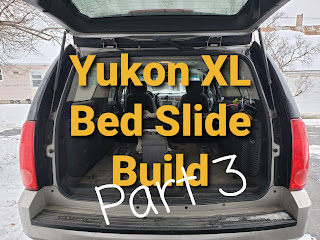 I don't want to buy a new puter but I'm willing to upgrade this one. Maxing out the ram seemed like a good place to start but as it turns out I ordered the wrong memory. This laptop uses an odd memory module and in the end I decided to upgrade my other laptop which is what I should have done from the beginning. Not sure when that order will arrive.

I want to step up my game as far as the videos are concerned. The content and subject matter will always suck, theres no getting around that, but I want the editing to be better. You'll have to be patient with me while I learn how to incorporate all these new features into my videos.

If you've been following my video posts then you may have noticed that my fresh remodel of the garage was looking like a hot mess. The work bench was 6 layers deep with tools, parts, scraps and rags. The floor was trashed too with metal grindings, wood shavings and general grunge. The routine the last few weeks had been to just "git er done" and skip the cleanup process so I decided to dedicate an afternoon to cleaning the garage. The first step had to be warming it up. 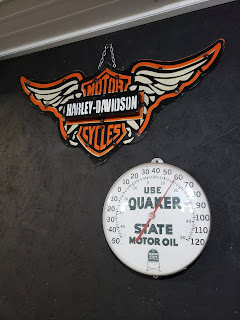 The remodel included insulation and its been about 45 degrees in there even though the outside thermometer had been hovering around 20 degrees. For my cleaning efforts I wanted it a bit warmer.

Big deal, so now its warm in the garage. Time to start cleaning. For the most part it was just a matter of putting things back into the places I've created for them during the remodel. A couple of nails were pounded to hang a few more things on the walls but the big job was washing the floor. This was the first time getting a close look at how the painted floor was holding up and I was surprised at how its not really scratched or chipped. 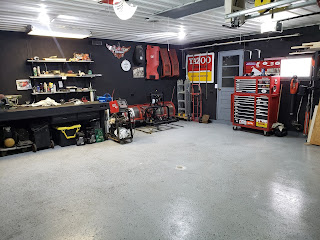 There are a lot of inconsistencies in the paint but thats all on me. Between stretching the paint to cover and piss poor application of sprinkles the floor could look a lot better. I have this thought that maybe next year or the following I'll lightly grind the sprinkles and apply another coat. The reason is because a painted floor really is a game changer when it comes to working out there. It feels like I'm working in the house or a man cave and not out in a garage with a greasy floor. Its also easy to find dropped parts and its inviting to sit on when working on vehicles. Messes clean up easily as well and another bonus is now that I've washed the floor it smells nice in the garage. The grease, ass, dirt and stale beer smells are all gone and it smells like a spring flower garden!

Overall this garage remodel has been awesome. I'm doing projects here at home that I might have taken to work just to be more comfortable. No I don't have a ton of space and it would be nice to have a free bay during the winter but the truth is that no matter how big you go its never big enough. Once summer rolls around again I'll park the big ass station wagon outside and get that free bay for bikes and other projects. Until then I'm enjoying the warm clean space that I didn't have before the makeover.

Posted by Scott Seidl at 5:41 AM No comments:

I split this project into smaller more digestible bites so as not to bore you with one long video that you wouldn't watch till the end. If you thought part one was kinda bland then stay tuned for more of the same. There will be a part three video and I promise to try to spice it up just a bit. 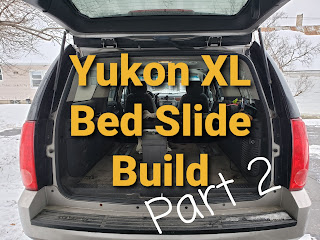 While working in the garage last weekend I found myself needing to make a 90 degree bend in a piece of 2" wide 1/4" thick metal stock. You can't just put this in the vise and expect to pull and hammer on it and end up with a clean tight bend. What you will end up with is a warped wonky ass piece of unusable scrap...or at least thats what I've heard. Normally at work I would use the press or a torch and get the steel red hot then make the bend with ease. I don't have a press or torch at home so how would I accomplish the important task of bending this steel? I could just cut it and weld the two pieces together but I had an idea and the only way to get those voices out of my head is to follow through with them.

"Run what ya brung". I've been using a cut off wheel in an angle grinder to do all my steel cutting chores at home. I used that grinder to cut a groove in the steel where I wanted the bend. 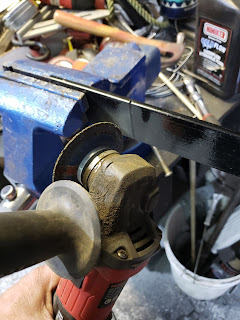 I've been contributing to the SnapOn truck vendors retirement plan and one of my latest purchases was a rotary grinder. I've had an air tool version of this forever but this battery powered right angle die grinder is a game changer. I like using it at work so much that I brought it home for the weekend just to find an excuse to use it. You'd think after talking it up so much that I'd have a pic for you but no. 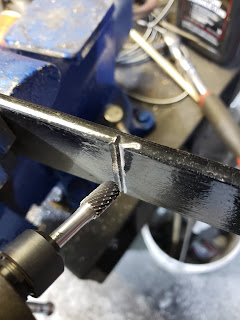 I quickly ground out a semi-circle area of metal along the slot I cut. This is just to provide clearance when the metal is bent. 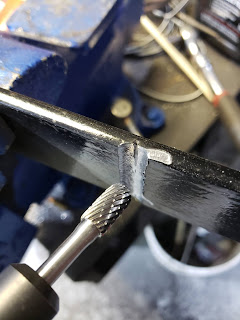 Big ass adjustable wrench. Not sure whos initials are welded in the handle but I know they ain't mine. 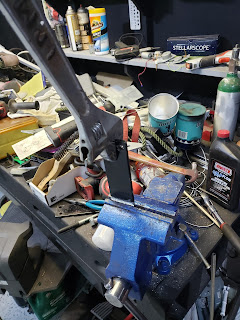 With the relief cut I was now able to easily make a clean 90 degree bend. I then just flipped the piece over and welded along the inside seam. 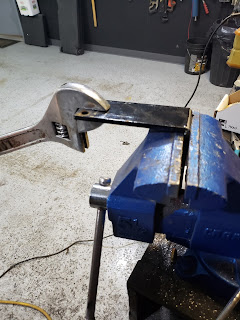 The idea of building a bed slide for the back of my Yukon XL has been stirring in my head for a while now. Todays video is part one of that build. 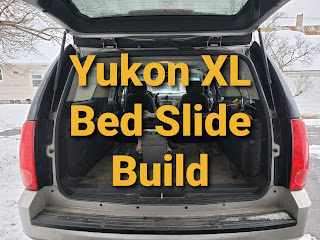