It started out innocent enough one day when I decided to mount the snow plow controller in my work truck in an unconventional location. I'm a "head hanger".  I like to crank the heat, roll down the window and watch the snow roll off the end of my blade. Ya, it doesn't take much to amuse me. My truck has a hand held electronic controller rather than a permanent mount like we had back in the day. In fact way back I had a jeep that just had a hydraulic hand pump mounted between the front seats. pump, pump pump on the handle till the blade raised. Turn a relief knob to lower it. "Hydro turn" used to mean you got a wet foot when you got out of the truck to manually pull a pin and turn the blade.
The rest of the guys in the shop were giving me crap because I told them I leave the controller hanging on it's hook while I'm plowing. I hate fumbling with the controller and muscle memory allows me to always find the correct switch in an emergency situation. Trust me, when you plow for 8-12 hours or more in one sitting, you run into emergency situations whether real or self induced. So anyway, to get them to shut up I told them I've seen how slow they plow and if they ever advance to the next level they would know what I'm talking about. That started it and of course it didn't shut anyone up, but we now joke a lot about what level someone is plowing at. When I learned Greg had a break down during a sanding mission, I immediately sent him a text telling him losing a wheel drops you back a few levels from commercial snow fighter to mere plow jockey.

The boss has decided to upgrade my plow truck. The old dodge I'm running has a power plow that extends from 8.5 feet to 11 feet. It also has a v-body salter/sander. The replacement Ford F550 will get those same type units installed plus an additional blade hanging off the back of the truck. We wanted something that would reach under the front of parked semi trailers and our choice was the Ebling back blade. This blade is 8 feet wide with a pair of 4 foot wings for a total width of 16 feet. Ya, thats a whole lotta blade!
Of course when we decide to do something it never seems to come easy. Ebling doesn't make a quick attach mount for our model of truck so we had to order universal pockets that we welded to the truck. 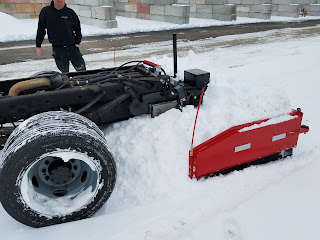 Worn steer tires on the back and we were still able to pull a full box of wet snow. I think I'm gonna like this truck.
Back on the topic of controllers. This blade has its own, plus the one for the front plow and the one for the salter. We're also adding a rear facing camera. It's gonna be pretty busy in that cab and I'll show you how I dealt with it in a future post.
Also, stay tuned for a post about how in the heck I'm gonna mount a salt spreader on this truck and not have the spinner jammed up in that box full of snow. We have to figure this out because failure to mount that salter is not an option and right now I only have a few unproven ideas.