A coworker purchased a Bauer battery powered heat gun to assist him with shrinking heat shrink tubing while doing snow plow installs and repair. Of course it has many other uses but I suspect working on wiring harnesses is where this tool will be used most. If you're not familiar then heat shrink tubing is used to protect wiring repairs and connections. 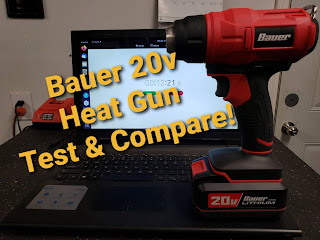 Posted by Scott Seidl at 7:42 AM No comments:

Last week I told you about how my wonderful wife bought me a new computer. I'm happy to say that its performing up to my expectations and video editing is actually an enjoyable experience now. When I started this post I thought I'd snap a pic of the puter setup on my desk. It has a few led lights which I didn't think I wanted but now I feel their subtle glow and movement gives the beast some life. Nothing fancy, just a few lights that rank it somewhere between the Space Odyssy monolith and Pink Floyds "dark side of the moon" album cover. Unfortunately my desk is a mess and getting a decent pic really is out of the question. "Why not take this opportunity to clean your desk", you ask? Cuz its a drag and I don't feel like it right now. What could possibly be covering my desk? Heres a partial inventory: 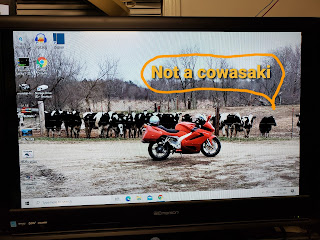 Two Gatoraids, three beers and a redbull. All empty except one brewski. A full bag of Jalapeno & Cheese chips and an empty bag of Cheese & Jalapeno. Different brands just inverted names. Both yummy. Approximately 1400 feet of wire, cable and power cords that need to be better routed. Seven pair of glasses. Various Ubuntu operating system discs. Some important looking mail. A Cologaurd collection kit. Maybe I can do a video of me creating the sample for that kit. Various tools. Five dew rags. And finally my Star Trek science officer badge.

I'm kinda in an organizing phase here at my desk. Lots of things to sort out with the change from a laptop to desktop. Don't want to jump head first into it so I'll clean the desk later. 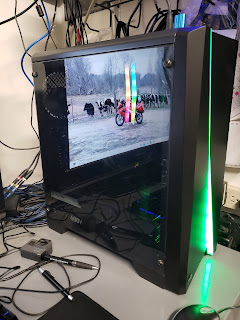 Posted by Scott Seidl at 5:29 AM No comments:

I know chasing smurfs seems like a strange name for a snow plow video and it is. 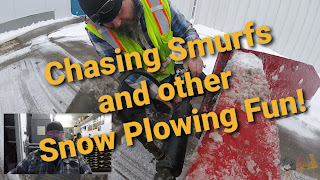 I guess you'll just have to watch the video:

Posted by Scott Seidl at 7:38 AM No comments:

Whats In The Box?

A better title for this post might be "My wife is awesome!" Yep, I've got a birthday coming up and she knew I was struggling with my computer to edit videos. Basically she sent me out of the house last night to investigate a computer purchase and I went to a small independent shop I had heard of. They had what I wanted and it fit into the generous budget she offered. Thanks Honey! 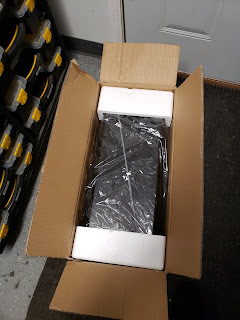 Not a very flattering pic but thats all you get till I have it set up. It got late and setup won't happen till after work today so deal with it. Imagine a black box with a clear side cover and a few LEDs. Yep,  they all look pretty much the same.

For you nerdy types I'll provide some specs. It has a Ryzen 5 3600 6 core, 12 thread cpu sitting in a MSI B550 Pro wifi motherboard. The graphics card isn't over the top but will work great for what I want to do. Its a MSI Radeon RX 5500 XT Mech 4gb. Two 8 gig sticks of DDR4 3600MHz Ram fill two of the four slots so upgrading would be very easy. The hard drive is a Western Digital 500 GB NVMe solid state drive and there is a second 2 TB hard drive that I'll use for video storage.

If all that sounded like gibberish thats fine. I'll break it down for you. You know when you watch a video and the frames freeze momentarily or you get the spinny wheel of death? Well when you have those issues constantly during editing it makes video editing very difficult if not impossible. On my old laptop that happens a lot. This computer should be just the right combination of parts to avoid those annoyances. I'll let you know next week if thats the case. Thanks again Honey!

Posted by Scott Seidl at 5:47 AM No comments:

While digging through my toolbox the other day I discovered an old tool hiding in the ranks among the pliers. 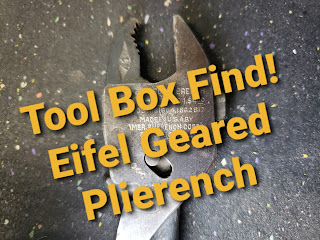 The video says it all:

Carbs on small engines seem to be a mystery to some people, sometimes even mechanics that work in other fields. There really is no mystery to them but when you look at a young tech in the auto industry, it turns out many of them have never worked on carbs. I mean everything these days is fuel injected so why would they? Sure a lot of guys will work on anything but even then the small two-cycle carb seems to be a mystery.

If you have taken apart a carb from a chainsaw, weed wacker or in this case an ice drill then you know that there are gaskets in there. Where they go isn't an issue but in what order seems to pose a problem and I'm gonna try to clear that up. 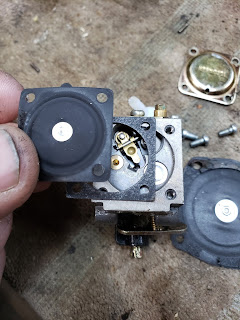 In the above pic you see an example of a typical two cycle carb. In the center of the carb facing up is a small arm called the metering lever. This controls the opening and closing of the needle valve that allows fuel to enter the metering chamber. The height of that lever is important but we're not talking about that today. Laying on top of the carb is a gasket and in my hand is another called a metering diaphragm. The metering diaphragm moves up and down and pushes on the metering lever but we're not talking about that today. The point here is that the order shown is how 99% of small engine carbs are assembled. Gasket, metering diaphragm then a plate like the one in the top right corner of the pic. 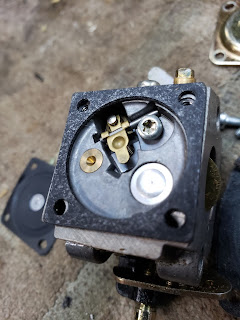 In the above pic you see the gasket sitting on top of the carb. Think of that round area as a carb bowl and the gasket depth increases the volume of that bowl. This may help remind you of the assembly order. I dunno, works for me.

So what is the exception? I'm not sure of all of them but I know one for sure is on certain Tecumseh engines. This is a carb from an older Jiffy ice auger. It seems a lot of ice fishermen are ambitious folks and try to repair these carbs themselves. We sell a lot of rebuild kits. The problem is that even if a guy has experience rebuilding carbs, this one is different. 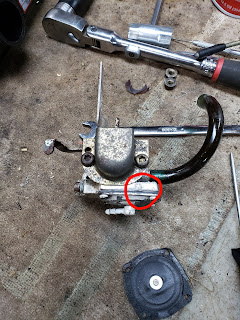 On these Tecumseh carbs, some of them are assemble bass-ackwards. If you take a close look in the area I circled... 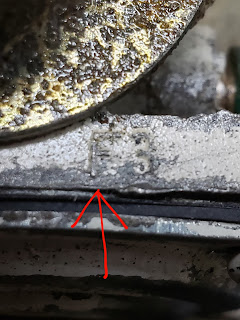 ...and you see the letter F then you know this is one such beast. The correct assembly order of the gasket and diaphragm is as follows: 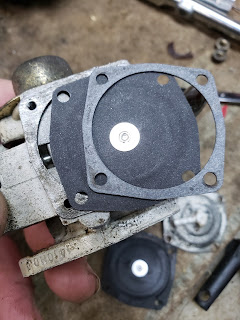 You can try and do it the other way but then you just get frustrated and bring it in to me for repair. When I see one of these come in and the work order says the customer just rebuilt the carb but it still doesn't run right I always know the first place to look...and now you do too! So go now and walk in confidence with your head held high armed with the secret of the type F Tecumseh carb.

Posted by Scott Seidl at 6:01 AM No comments:

Put A Hole In It!

While digging through my toolbox the other day I came across an old tool that deserves to be talked about. My brother gave it to me years back because he didn't think he had a use for it (and because he is a great guy). I find that it only gets used once in a while but is a very useful tool when needed. 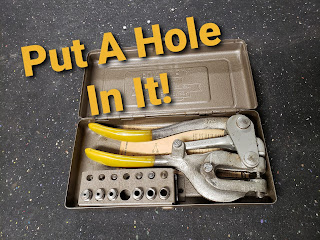 Here is a blogger bonus bullet point. If this tool is something you might be interested in then you should know that it comes with an adjustable depth gauge. It allows consistent depth spacing of holes like if you wanted to run a series of holes along a piece of sheet metal and have it look pretty.

The video starts out slow as all of mine do but I promise there is a pinch of spice in here and the whole video represents a direction I'd like all my videos to go. Who am I kidding? Most of my vids are a yawn fest.

Why Did I Do This?

I usually show you stuff I've done and explain how or why I did it. Not this time. We're looking at a chainsaw flywheel with an ear wax problem, or so it would seem. Whats really going on here? 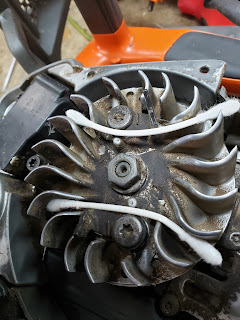 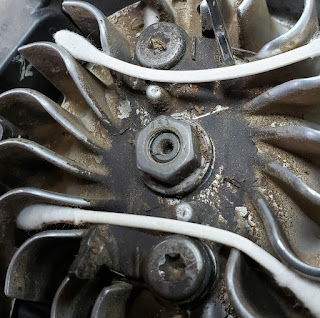 You tell me. Whats going on here? Guess it right and you get the same thing you'd get if you didn't guess at all...bupkis.