Happy Birthday To Me

I'm a little late getting this post out today. Not because its my birthday but because of snow plowing. With all the snow events we've been having there really isn't a regular schedule to live and sleep by. Yesterday I spent the day in the truck and came home to eat and get four hours sleep only to return for ten more hours of plowing. Tomorrow I'll go back at 3am. Don't get me wrong, I'm not whining. I like plowing. I'm just saying as the years tick by it gets harder to maintain these jacked up hours and today another year just ticked by.
My wife got me a great gift for my birthday. 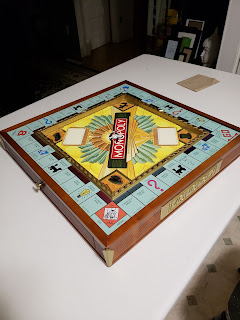 Its a 70th anniversary edition of Monopoly. I googled Monopoly and the game is over eighty years old. That makes this set over ten years old. She bought it from a co-worker that seems to have never used it. Sweet.
When I was a kid we would play monopoly with other neighborhood kids. The games lasted many days. I remember having a folder or notebook of some kind to hold my money and deeds in as we traveled back and forth to the game. As far as who usually won or what rules we played by I'm not sure but I think my brother Thomas was pretty good.
My wife and I have three daughters and we have made a holiday tradition of playing the game. The games get pretty intense sometimes and for the longest time I was almost unbeatable. This musta pissed the kids off because now a Monopoly win is savored like a rare treat. I wonder which one of my children will be the first to shed a tear when they land on my hotel on Boardwalk or Park Place?

Some of you that have been following this blog for a while may remember three years ago when I talked about making a plow mount for one of our tractors. 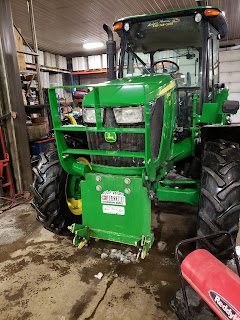 This is the actual mount that is removable. 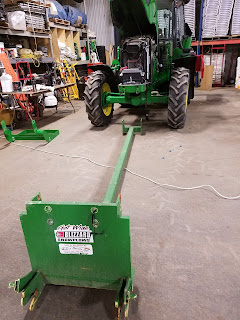 I like to follow the rule that you can never build something too heavy so when coworker Matt told me my mount was "all broke to shit" I was curious. The machine has three seasons on it now so I suppose we could start seeing some cracks. When I inspected the mount here is what I found: 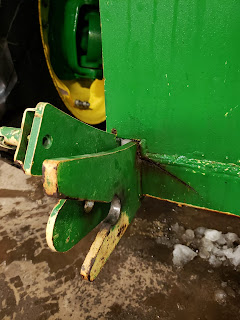 I'll include a pic of the actual crack. 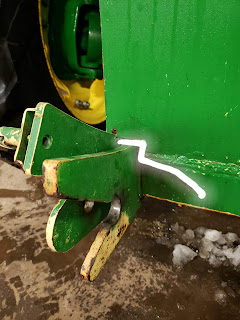 This crack is entirely in the factory push arm and not in my mount. That made me feel better but the way I have it mounted may have been a contributing factor. On trucks a lot of times we see the mount loosen from the frame or flex in other spots but here the plate I made doesn't give at all. The weight of the blade twists on that push arm and it eventually cracked. No problem, we'll just make it stronger. 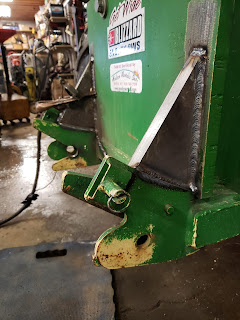 Cutting these 1" thick pie slice shaped gussets wasn't easy. The oxy/acetylene torch tip was all jacked up. The plasma cutter had no good tips and the plate of steel I was cutting these from was too big to fit in the band saw. Eventually enough cussing and throwing shit around got the job done.
I don't think this mount will be giving us any more problems unless theres an accident that causes major damage to the plow or tractor. If it does crack again I'll just weld more gussets on it. There is a small crack on the back side of the push arm but I'll weld that when the whole mount comes off this spring. 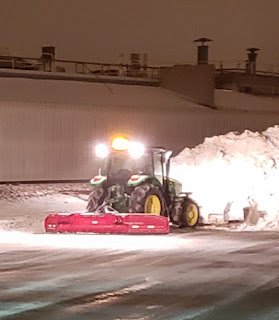 The tractor has been a great unit for us. The front blade has power wings on it and when they are extended the blade width is 11 feet. On the rear we can run a snowblower but the tool of choice has been the 16 foot Ebling back blade. 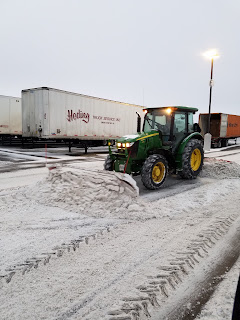 Its been a busy year for us plow jockeys. Lots of little stuff and a couple of bigger events along with an awful lot of salt usage. In a perfect world we'd get a few decent snow storms in march then a big thaw and be ready to start lawn work by April 1st.

Progress on the BSA has been slow unless you count me reporting about slow progress then progress is about normal. This pic is from March 2017: 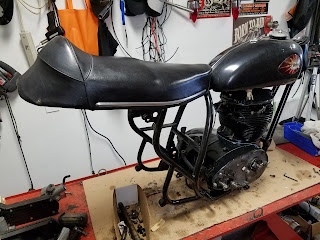 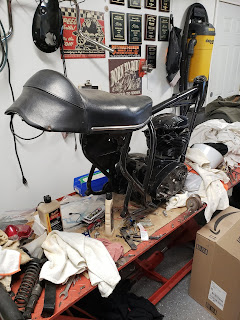 Actually it looks like I'm going backwards because the tank isn't sitting on it but the fact is nothing has happened unless you count all the shit that has collected on the lift table. I think about working on it and how I want it to look. Is that progress?

Posted by Scott Seidl at 3:55 AM No comments:

Email ThisBlogThis!Share to TwitterShare to FacebookShare to Pinterest
Labels: BSA

I got the Yukon back from the body shop after a deer strike caused $5100 damage to the front end. The team at Baird GM did a wonderful job of putting it back together for me and keeping me informed of progress along the way. 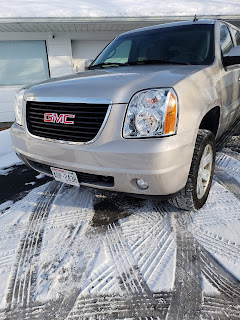 I missed not having the rig for a couple weeks. After spending a lot of time searching for a replacement pickup truck and settling for this, it turns out this is really what fits my lifestyle. Yesterday we had five adults in it for about an hour. Sure a four door truck can do that but not as comfortably as this with its three rows of seating. Theres enough room in the back to haul a 4x8 sheet of plywood so thats really all I need.
We went out to dinner last night and on the way home all I could think about was hitting another deer and my $1000 deductible. Don't want to go through that again anytime soon.

Later.
Posted by Scott Seidl at 7:53 AM No comments:

I'm writing this on Tuesday evening because I have to get some sleep and be back in the truck by 2am. We got another all day snow event that currently measures about a foot but its still coming down. I got home and grabbed the Toro snowblower to start clearing the drive. It went about 6 feet before a cable broke. I don't get why they are making these things with plastic parts and cables. Its just asking for a failure. Lucky for me I keep a backup snow blower. This one is an old Ariens, probably from the seventies. Its only rated at 6 hp but seems to have the power of a modern day 10 horse. The drive engagement is a steel lever with a control rod and so is the forward speed/reverse lever. The auger is the old widow maker style and keeps running even if you walk away from the machine. 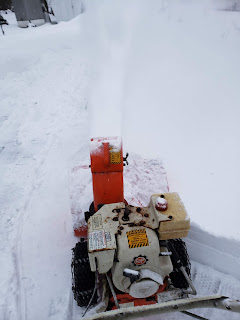 I guess it took about an hour to clear that foot of snow. The berm at the road was about 2 feet high and the machine crawled right through it without hesitation or belt slippage while in low gear. Actually it probably ran better than my work truck did today. Thirteen hours of deep snow and I couldn't use four wheel drive. Whenever I engage 4wd, the accelerator pedal goes dead. The answer to this problem is to load 3 yards of salt in the truck and just do the best I could in 2wd. It goes in tomorrow for repair but not before another plowing session early Wednesday morning. I gotta go.

Later.
Posted by Scott Seidl at 6:04 PM No comments:

Yesterday I was heading home from work just minding my own business, when some jackwad in a vw passes me on the right. This has happened before and will happen again because its in a spot where two lanes merge before increasing to hiway speed. Being passed bothers me. Being passed on the right pisses me off. Being wildly cut off by some unskilled bitch in a shitbox car really pisses me off. She would have hit me if I didn't brake. Not that it would have mattered to me because I'm in a loaner car while they repair the deer damage to the big ass station wagon.
OK so I'm pissy but not too terribly. Theres no road rage going on here but I felt she should know how I feel about her driving habits so she got the double birdies. The thing is, she won't even look in the mirror. I'm right behind her and can see that shes just looking straight ahead and ignoring me. So now I'm a little more pissy cuz I didn't get any justice here. Five miles down the road and we get to a red light. Still not one single glance in the mirror but I know that she knows that I know shes a bitch. Oh well, I'm over it. The light turns green and she takes off. 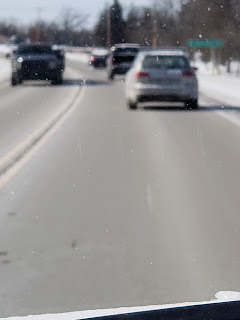 The car had Wisconsin plates on it but I don't think she was from around here because when she took off it was like a bat out of hell. I kept thinking if there is any justice in this world then that state trooper that sometimes sits over this hill will be waiting. Sure as shit I see her brake lights but it was too late for her. The trooper must have caught her speed as she crested the hill cuz he had her pulled over before I even got there. It was like a huge weight was lifted off  my chest. I've been in this situation before but the cop was never there waiting. I slowly drove past and just waved but she didn't even look up and acknowledge me. Oh well, she knows that I know that I'm not the only one questioning her driving habits. Justice served.

As I've posted in the past, a few of my bikes come in the house for the winter months. The two that are in this year are the Rat Turd which is a Kawasaki and the Harley Sportster. Guess which one has been pissing on the floor. 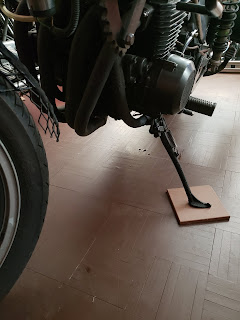 Yep the jap bike is the incontinent bitch that can't hold its oil. The Sporty is doing just fine and yes theres oil in it. 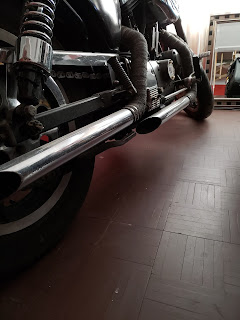 Again, I really should get my ass in gear and sort out this bike so its ready for spring when I'm ready to ride before the roads are clean enough for the Ultra.

Today is the birthday of my wife Stacey and I want to wish her a wonderful day. I was searching for my favorite pic of her and couldn't find it so I'll post this one from about 25 years ago. 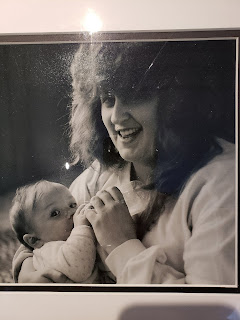 In my eyes she pretty much looks the same so its legit. Have fun on your lunch date and I'll have dinner ready tonight. Happy Birthday!

Later.
Posted by Scott Seidl at 7:52 AM No comments: