I'm really enjoying Mowby Dick, my Husqvarna Automower. Its nice to not have to cut the lawn and just deal with some detail work every now and then. One thing about the mower has always bothered me though. It has headlights but no tail lights. The head lights flash when there is a problem but otherwise can be scheduled for day or night. The mower doesn't need lights to "see" but when its on a city sidewalk in the evening, the light helps people avoid the dumb mower that just randomly wanders wherever it wants. Tail lights would make this machine even more visible and safer, especially when approaching it from behind, so I set out to make the upgrade. 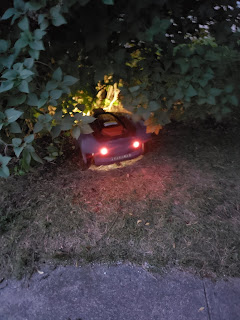 As you can see from the above pic I was successful. What follows is how I went about doing it.

First off, I can't find any reference online to anyone else doing this so I was on my own. My main concern was overloading the main board in the mower. I'm not an electrical engineer and I have no idea how they get all that smoke in the wires. I just try to proceed with caution and gumball logic. So some things I noticed were that the main board on my 450x has 4 pins on the Aux output that powers the led headlight and only 2 were being used. I also noticed that the output was 4.2 volts. A third thing I noticed was that the add-on lighting kit for the old 430 models used three wires and split into two plugs. These are the plugs you disconnect underneath when separating the top cover from the main body of the mower. 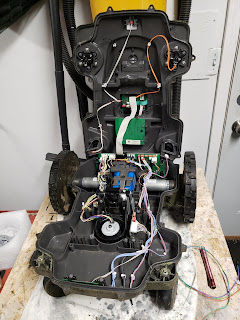 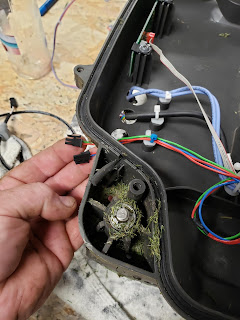 I replaced the 450 lighting harness with the 430 kit harness and now had two plugs hanging out under the mower ready to accept lights. One plug will get the 450 headlights and the other gets the pair of 430 lights.
My plan was simple. Use the 430 headlight kit that I know is the proper voltage as my tail lights. The rear section of the top cover unbolts with 4 screws and is easily replaceable if I screw up. 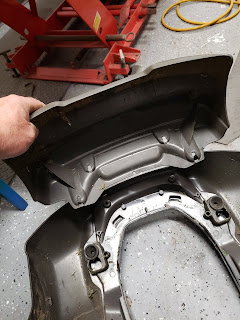 The 430 lights are a sealed white tube with a flange on the end. I just took some red button lights and sanded them down till they fit the end of the tubes and epoxied them in place. There were a hundred ways I could have done this and I'm not even sure why I chose this route. 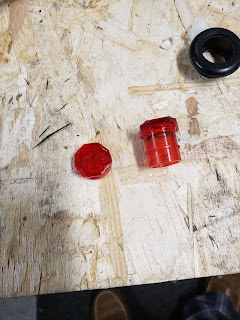 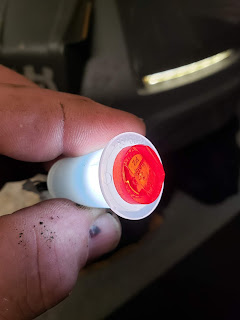 Then I drilled a couple holes in the bumper and epoxied the tubes in place. The white ring lights up too and because of the length of the tubes, I get a ground effects type of glow under the bumper. I think I'll black out the exposed tube behind the bumper to eliminate that glow. 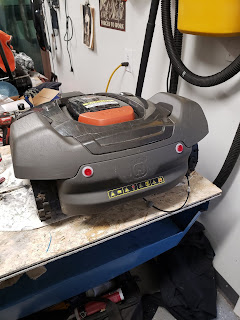 There's plenty of room under the top cover to handle the depth of these lights in the place that I put them. Originally I was just gonna illuminate the husky logo and I still might some day. For now I wanted to just get this thing lit up. 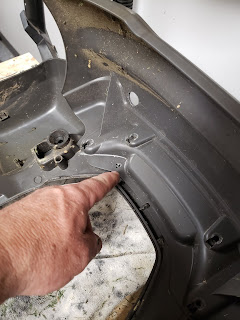 I drilled a couple holes in that rear bumper to pass wires through. You can also see a hole for the tail light tube. 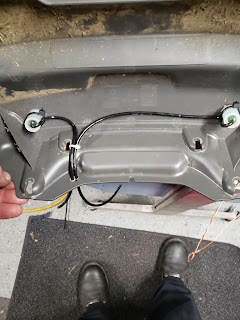 The wires then drop into the channel the proximity sensor wires run in, and run all the way to the front of the cover. I had to solder extra wire in place so don't get any ideas that it was "plug-n-play". 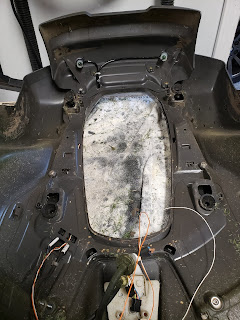 I know this only makes sense to those that have been under the hood of one of these mowers so I'm trying to make this painless as possible. 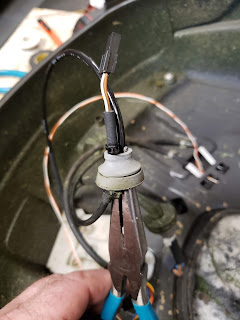 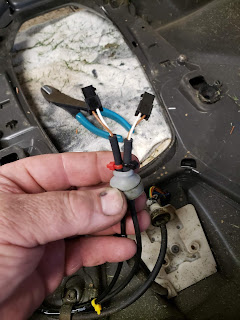 Now my top cover has a plug for front and rear lights. Everything goes back together just like the factory intended.
So heres the deal. I don't know if this is going to last or if it will release all that smoke the engineers spent so much time installing. I had an old employer that used to say "Theres 10 ways to Berlin. I'm not gonna tell you what route to take, just get your ass over there". If you decide to do what I did then you're on your own. I'm not suggesting you do it or that this will hold up in the long run, so don't call me sayin I made you fry your mother board. BUT, if you do this and do fry your machine, I'd love to see pics of the carnage.
I will say that I'm happy with the results.

Email ThisBlogThis!Share to TwitterShare to FacebookShare to Pinterest
Labels: automower