Is It Good Luck Or Bad?

If you follow along on this blog then you know all the content lately has just been links to YouTube videos. I found that I like making videos better than writing a blog so I have just been using Blogger as a way to share those videos to Facebook. Its not like I have a bunch of followers there but I'm there so I use it. Anyway, because we haven't talked in a while you probably don't know that I'm supposed to be on vacation right now. Well, I am on vacation, just not the one I planned.

On Saturday I threw a leg over the seat of my Harley and headed south for the Smoky Mountains. I've done this trip almost twenty times now so not much planning was needed. One thing I did do was service the bike. Everything seemed acceptable but as I got within an hour of my destination I began to hear a noise. I couldn't pinpoint it but it sounded like it was coming from the primary drive (chain between engine and clutch/transmission). As I was monitoring the sound I felt it was getting worse.

I lost sleep that night worrying about it. I googled uhaul rates, repair shops, and the motel info for the place I was gonna stay at the next four nights. I finally got a bit of rest but when I awoke I knew the closer I could get to home the less it was gonna cost me to haul it home and I'd have the whole week to get there. I packed my shit and headed north. I did get to talk to a friend on the phone about it but didn't get to meet up with him or any of my buddies that I'd been vacationing with for the last twenty years. We missed a few due to mud slides and covid so this was gonna be a nice reunion. Not seeing those guys is the worst part of this non-vacation.

The ride north felt right even though I just got here and now I was heading home. I wasn't sure if I was making the right decision but I knew if I stayed and then later had problems I would be upset for not following my gut. I also wouldn't have enjoyed myself worrying about all the "what ifs". On that ride north I learned something about the gps on my bike. Every time I stopped for fuel and then turned the bike back on the gps (Sparkles as we like to call her) would recalculate the route. Well one time Sparkles decided to take me through Chicago. What Sparkles didn't know was that I made a promise to myself never to ride through there again on a motorcycle. I didn't realize her intentions till I exited onto I75. Now I've made this trip enough times to know better than to follow that exit suggestion but I had other things on my mind. Remember the whole strange noise problem? In the end I only made 400 miles that day because of the route correction needed and road construction. I could have pushed further but part of my plan was to not ride after 5pm in case I needed some type of roadside assistance.

The second day north started out wet. If you ride a motorcycle for anything more than bar hopping then you just accept the rain and prepare for it. I was prepared for rain but not all that road construction. At one point I had been sitting almost still on the interstate for about twenty minutes in the sun sweating my nads off. I had thought about riding the shoulder at a slow pace just to keep moving but just as I was taking a peek up the road a state trooper came flying down that shoulder at what seemed like a hundred mph. I waited in line with everyone else till I saw an exit coming up and then ran the shoulder to it. I didn't know where it would take me because Sparkles isn't good with that type of mapping. I made a twenty mile loop on some nice back roads, just me and my noisy bike, till I got back to the Interstate where traffic was moving. The rest of the ride was sunshine and splash 'n go fuel stops till I found my way to my garage. I had made it 1000 miles without break down. Would I have made it if I had put on another 1000 during the week? It doesn't matter, I would have been a mental wreck worrying about it.

The day after I got home I took the cover off the primary drive. Except for some metal on the drain plug I don't see anything wrong. Maybe the noise is in the engine or the transmission. I don't know. Instead of digging deeper I decided to work on the big ass station wagon. It needed an AC compressor and I had the time. On the way to the shop, at the last intersection before the shop entrance, I lost power. I coasted into the shop drive where a coworker just happened to be and he said I was leaking something. I figured it was trans fluid because the Traction Control light and chime had just come on and I didn't have power. Yes I have a traction control problem but what I was leaking was coolant. I blew a heater hose. As I type this I have to wonder if the spraying coolant got on a wiring connector associated with that traction control. For them to be two unrelated problems is one hell of a coincidence. I spent all day working on the ac issue, the coolant hose issue, the traction control issue and my new problem, the oil pressure warning chime which was under control but now decided to show its ugly side. 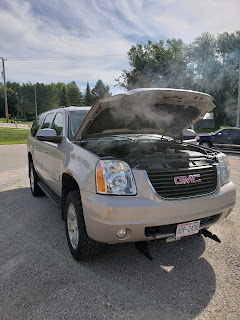 I have to believe I have very good luck. I'm just not having the vacation I was hoping for.