The riding season is winding down and I haven't done anything new with the bikes in a while so you will start seeing a few posts that don't contain anything motorcycle related. I'm not gonna apologize for that because it won't kill you to expose yourself to something less "gear head". Actually that last statement was aimed more at myself than anyone else so when I saw a post on facebook that my buddy Dan and his friend Aelwyn were having an opening reception for some art they created, I decided to attend. 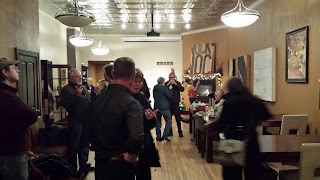 There were some pieces that caught my attention and it amazes me how much time and detail a person will commit to "art". I admit that I don't know when a piece is making a statement or if it needs interpretation to be understood. I just know what I like. 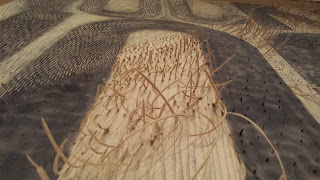 Ya I've spent a lot of time on artsy fartsy crap in detailing the Rat Turd. You can find that on the pages of this blog. The difference is that my efforts don't come off as art. They're more of an expression of a cheesehead with extra time on his hands. Hey, when the snow flies and I can't ride but still want to do something bike related, I end up with something like the Rat.
Dan and I talked about bikes and art and he revealed he had considered parking his Triumph in the front window of this downtown business. I would have approved...not sure about the rest of the visitors. I'm pretty sure that I was the one person there that could have been caught mistakenly admiring a piece of furniture thinking it was part of the art collection.
Aelwyn had on display a collection of drawings she had recently scribbled out. 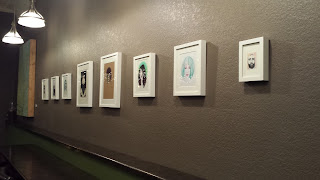 Of course I kid when I say scribbled. The truth is she has talent and I'm jealous. I can't draw a picture of the human face to save my ass. My efforts look like a stickman with a bad hair day and I applaud anyone that can pull it off. 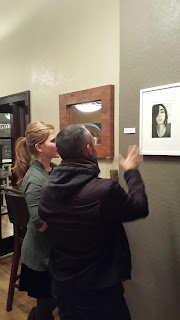 I overheard an art professor from the local college critiquing one of the drawings and realized there is so much in this world I don't have a clue about. After a conversation with him about what I do for a living I wondered if he was thinking the same thing. We all have different interests and I guess that's what makes the world go 'round.
If you want to check it out, their work will be on display for the next few weeks at Mugs Coffeehouse in Ripon.
Oh, and to my daughter that teaches art at UW Madison, Ya I said artsy fartsy. It's all good.