I talked about storing the Rat Turd in the living room of our house and now the deed is done. Getting it in there was a bit more of a chore than just rolling it in place because the bike is kinda fat with the storage rack on the back and large saddlebags. The upright muffler is actually angled away from vertical and that along with my drink holder on the other side make the bike a bit too big to fit through three of the four doorways it would have to pass. 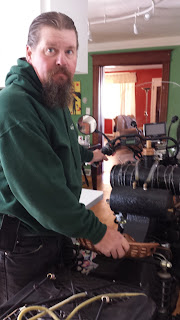 I had to remove the saddlebags, drink holder and muffler. The muffler may have been ok on there but I was worried about the barbed wire scratching a kitchen cabinet. So, from the garage I passed into my workshop then down a step into the laundry room. I then needed to go up a step, through a glass door and into the kitchen. It was at this point I discussed with my wife how much easier it would be to just fire up the bike and ride it into place. Lets just say it was decided she would just help push the bike up the step. Thanks Honey.
After navigating between the kitchen counters and taking a left hand sweeper around the dining room table it was time to enter the living room and push the rat up onto an elevated section that just happens to be the right size for displaying a bike. 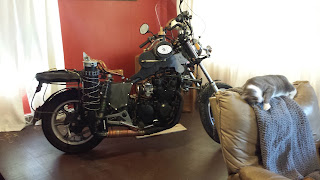 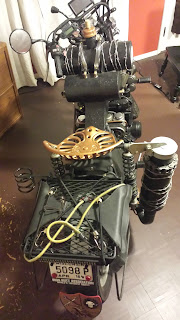 This will be the home for the Rat Turd this winter. It's not an ideal situation because I would like to periodically work on the bike and I won't do that in the living room. What I can do is spin my recliner around, tip back a few brewskies and think about what changes I can make for next year. I've mentioned in the past I want to change the front end but I'm not sure how. Hopefully those brewskies will help me come up with something funky.