What am I gonna write about next? That question is asked of me all the time at the shop. Whenever something odd happens, "Hey you should put that in the blog". If I followed that advice I'd be talking about things like setting the clocks back. Everyone keeps looking at the clock and asking if it was turned back yet? At 4 pm it should be quitting time (5pm) but the clocks are turned back. One more hour of work. One more hour for the sun to go down and a dark ride home. 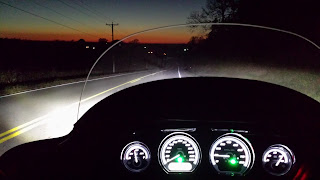 Maybe I could tell you about the guy that came into the shop whining about his chainsaw that wouldn't stay running. "I just had you fix it in June". Yes our records show we replaced a fuel hose. We're pretty busy but I'll look into it right away. Turns out he had a whole lot of water in his fuel tank. You can't pin that one on me and you'll be getting a bill.
I guess I could make a whole blog post about the torsion bars that wouldn't come off a chevy truck despite the efforts of four shop techs and a bunch of hammers ranging from small sledges to a large electric jack hammer. In the end the answer was to use a torch and replace a few parts.
A story I like but am not gonna talk about is the one where Al screams like a little school girl. OK you twisted my arm, I'll give you the short version. Al and I were in a storage building looking for a radiator that might fit into a forklift repair. While balancing on a couple wobbling barrels, Al lifted the tarp off a wooden box to see what might be in there. To his surprise he was now face to face with a raccoon! (insert scream!) I laughed but kept my distance. The story quickly spread through the shop and it didn't take long before the young bucks went out there and (ahem) diffused the situation. (In Als defense, anyone not looking for a critter would have been just as startled.)
What I thought I was gonna write about is my riding jacket. It's over ten years old and has tens of thousands of miles on it. I've had it for five different bikes and it has been to a few cool places and been through some really crappy weather. A lot of good memories were made wearing this jacket. Well just the other day the zipper broke. 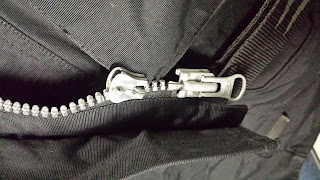 The zipper works but the pull tab broke off. It makes it hard to open and close and impossible to operate with gloves on. The rest of the jacket has a lot of life left in it so I looked at ways to fix the zipper. 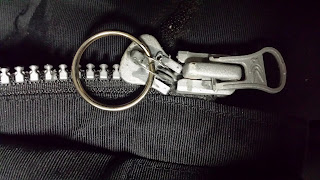 A little piece of wire and a key ring should get me by for now. I think it may be repairable. I'll have to look into that.
What I really want to say is I'll be riding the bike to work again this morning and enjoying the above normal november temps. The forecast looks favorable for riding yet next week. Woohoo!