When it comes to branding, nobody does it better than Harley Davidson. The bar and shield is recognized world wide and appears on everything from genuine accessories to useless trinkets. It also appears as outerwear, underwear or even permanent ink on the bodies of many an enthusiast. The Motor Company has really got it figured out. We the consumer pay good money to advertise their brand. 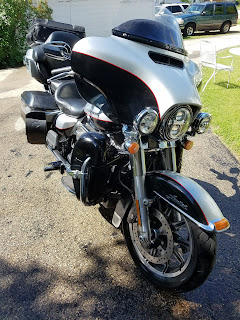 This post isn't about "us" or any desire to be part of a brand. I want to talk about the people that are actually paid to represent these brands. If we like a celebrity that represents a brand, then we maybe gravitate to that product. It works the other way too. What was the deal with Jeff Foxworthy in that super hero stuntman outfit representing Golden Corral? I hope he got paid well.
My problem is with the paid employees we actually interact with. The people that work at the shops and dealerships. These people can take a good brand and absolutely foul up my perception of it. I own a HD Ultra Limited and I like it. I know what it can do and it makes me happy. It's the Lick Knobs at some stores that piss me off and lessen "the brand". Here's some advice for the owners of these shops. If you let your employees lie to customers and waste their time, you will lose those customers. I know because I'm an employee that represents a few different brands and we make every effort to satisfy the customer even when they are wrong. I should point out that not everyone I interact with is a "customer".
Case in point. In a phone conversation, Lick knob A tells me they have a part in stock. After traveling quite a way to the store I discover that not only do they not have that part in stock, they have NEVER stocked that part. What the hell? As much as I wanted to go off on the lady at the counter, I knew she wasn't the one that I originally talked to on the phone. She was a perceptive old gal and could see I was on the verge of being one of those A-hole customers that didn't get the service they were expecting. I kept my cool and she did her best to locate the part at another store but struck out.
And then I spotted Lick Knob B. This is the guy that was "helping" me when I walked into this shop a while back to buy the new Ultra. I had a lot of questions about the Rushmore models and this guy treated me like shit. A potential customer of a flagship bike shouldn't walk out feeling belittled and treated unworthy of the brand. He even implied that I couldn't afford the bike. Sure I was in my work clothes but so what. Who the hell did this guy think he was? I got even by purchasing the bike at a different dealership and I thought about that as I walked out during this visit. They got their second chance and blew it so I'm done with them.
If you decide you want something then you have to decide where to spend your money. Is price always the deciding factor? Not for me. Sometimes I'll go out of my way to get a part if I need it now and other times I'll get a decent price and wait for it to be shipped to me. When I don't need the part right now then its about who I want to support. In this case I thought it was a nearby dealer but they pushed me away because of a few employees that don't get it.
I won't name shops because I've found out that everyone doesn't get the same satisfaction from a given dealer. I may have a great experience at a place that you got snubbed at. That's why I usually give them a second chance but when you dick me around twice in a row then I'm done.

Rant over. Later.
Posted by Scott Seidl at 6:03 AM