Our tent crew at work has been after the shop techs to build them some kind of stake puller for those tough to remove tent stakes. 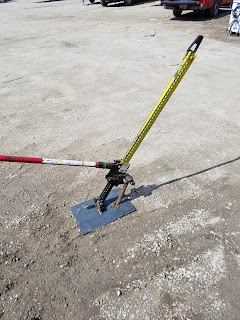 There has been a lot of talk about converting log splitters, building self propelled hydraulic units and many other mechanical doohickeys. The other day when Dan asked about a puller I decided it was time to "just do it". The idea of beefing up a hi-lift jack had been discussed and I was in the right mood to build it. 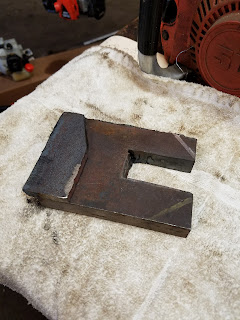 I don't claim to know everything and the nice thing about our shop is wealth of knowledge that is freely shared among the techs. When I asked the others how thick they thought this piece of steel needed to be, most thought half inch thick. I don't know why I asked because I had already planned on using some 3/4" plate. 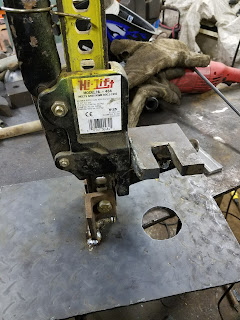 Most of you have figured out by now that my method of building shit like this is "go big or go home". If the jack breaks, I don't want it to be where I modified it. That's the reason I chose to use 3/4" steel for the piece that actually pulls on the stake. I mounted it in a way that most of the pulling force is on the original jack lifting pad. Thanks Al for the idea. 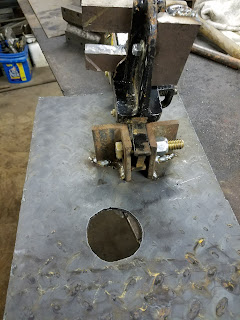 The base plate has a hole large enough to allow a stake head to pass through. The jack upright is raised so it can pivot to compensate for stakes pounded in on angles. This way the jack will never shit out no matter how many monkeys are on the end of the handle. The hole in the plate design assures that. 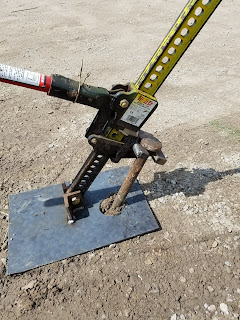 The tent crew took it out on a few jobs already and it's not broken yet. When I asked how it worked I was told it does what it is supposed to do and got a thumbs up.

In other work related news, it seems I'm to blame for the destruction of all living creatures on the planet. The other day I was spraying some weeds in a lawn when I noticed a lady walking down the sidewalk. My spray rig was parked in the street and the hose was hanging over the sidewalk, meaning a person would have to lift their leg up and step over the hose or walk in the freshly sprayed lawn. Both are unacceptable and I was watching for this scenario so I moved over to the machine and pulled some slack into the hose so it would lay flat on the ground. As the woman passed she said "thanks..." and right away I thought she meant for moving the hose. Before I could finish that thought she continued "...for killing everything!" Set phasers to stun I just took a direct hit. She had a look on her face and the tone in her voice as if I had just pushed the button on a doomsday device. I was at a loss for words and all I could do was smile and laugh. She continued across the street and struck up a conversation with some workers there and in a short time they were all watching me.
I wonder what crawled up her ass and died?