Yesterday was another work day and let me tell ya, some people really challenge my ability to not be a dickhead in the store. I was talking with a customer in the showroom when a guy taps me on the shoulder and says he hates to interrupt but...and then he goes on with his lame ass story. The first thing I did was look around to see if I was being filmed because this guy was politely being rude, if that makes any sense and I felt like I was being set up. I wanted to give him a quick answer that would get him to leave me alone because I knew he was just looking for free advice. I came up with one that made him go away but what I wanted to say was if you hate interrupting then why are you doing it and by the way go jump in the lake. And another thing, why do you think your problem is more important than this gentleman that got here before you? OK, I'm done venting.
So after work my wife and I went for a joy ride. No destination but I was tired and knew I'd keep it under a hundred miles. 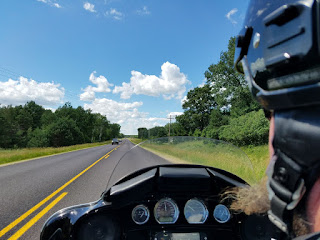 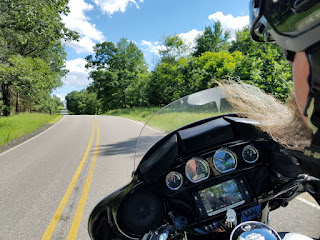 I thought this pic looked odd because the road looks pretty straight but the bike looks kinda leaned over. Not really leaned over but tipped more than appropriate for the situation. I don't even know where this was so I can't piece it together. 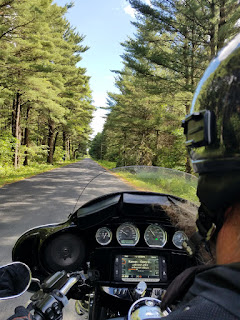 Just a breezy ride on some quiet back roads. I realized I had traveled about ten miles on these back roads that were posted 55 and I had not even touched 45mph. That's one of the first signs of getting old. I forget the other signs. 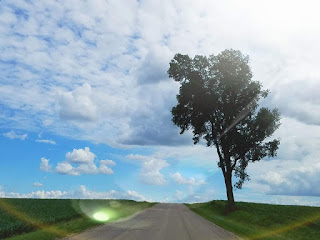 My wife is our official photographer and she gets some interesting shots despite the fact I don't take her to interesting places. The glare screwed this one up. I call it "alien campfire".
Our turn-around point turned out to be take out chinese. We didn't leave the house with food in mind but it ended up that way. It's fun not having a plan and ending up with a nice ride. The sun is shining and we should be able to get out again today. See you on the road!