This past week had me stuck in a rut.  When asked "How ya doing?" I'd reply "Its Groundhog Day again". The difference between my week and Bill Murray's adventure is that I didn't try to create the perfect day. I just trudged through waiting for things to change.
Well something is very different this morning. I woke at my usual time, 0-dark thirty, and noticed that it quickly got light outside. Thanks to the wonders of the modern smart phone there is no setting the clock back but only acknowledging that daylight saving time has ended. Something else is different. Today my wife and I are faced with a big unexpected financial burden. Last night we were on the interstate when the car engine killed. A lot of things go through your head when these things happen and I immediately realized a tow truck might be in my future. I was doing 70 (ish) in the left lane and needed to get to the right shoulder before I lost momentum. I know I pissed one guy off who probably thought I was just an a-hole cutting him off but shit happens and there was no left shoulder. Once safely on the shoulder and having answered all my wife's questions I made an attempt to restart the engine. The starter engaged and the motor spun but there was clearly no compression. I was pretty sure the timing belt checked out and there is no fixing that on the side of the road on a rainy Saturday night. Even if I had the tools and parts there is no fixing it. See this Subaru engine is an "interference" engine meaning if the timing belt is out of time there can be contact between the valves and piston. Based on the two loud bangs from under the hood and the feeling at one point that the drive train momentarily locked up I'd say there was not just contact but an all out brawl. 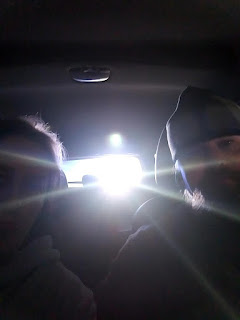 Out of curiosity I popped the hood but there was nothing to see. I got back into the relative warmth of the car and my wife handed me the phone number for road service that she had found in the glove box. After a long conversation with the roadside assistance rep we came to an agreement as to where I was located. A tow truck should be to our aid in half an hour. We sat in the car being blown around by the wind blasts from big rigs and came to the conclusion that seat belts might be a good idea even though we weren't moving. About ten minutes into our adventure we had a state trooper pull up behind us and I was actually happy to have his reds blinding me through my rear view mirror. Our flashers weren't working and with just tail lights on a rainy night we were feeling a bit vulnerable. The trooper made the usual drivers license check but didn't even ask to see insurance papers after we explained that they had a truck in route already. He offered to hang out until we were off the hiway.
If you don't know what your roadside assistance covers then maybe its a good time to check your policy. I found out mine covers the hook and ten miles. We were sixty miles from home so there would be some out of pocket expense. The towing service showed up when they said they would despite one more phone call and two text messages. They actually made a miserable situation somewhat palatable.

This was my wifes car. The plan was to run it till summer and then get her something else. I would run her hand-me-down car and we'd keep the truck for pulling the trailer and hauling shit. Right now I don't know what the new plan is. I can't walk away from a car I still owe money on but I don't know if its a good idea to stick big money into a high mileage car. I'd have to keep it forever because there would be no breaking even by selling it. If it were a bike I'd fix it no questions asked because I always plan on keeping every bike I buy even though I don't keep them.
Right now I need to decide if we look for a temporary beater, a permanent replacement or something else that I'm not even considering. Until then my wife will have to drop me off at work in the morning and then drive my barbaric pickup truck the rest of her way to work. It just occurred to me that if it snows and I need to leave at an odd hour, she's stranded.
I think I preferred the humdrum boring week I was stuck in.

Email ThisBlogThis!Share to TwitterShare to FacebookShare to Pinterest
Labels: gremlins