Last week I made my first attempt at a vlog and if you watched it you know it sucked. I'm fine with that because this isn't something I have to do or am doing to make money. I'm just having fun messing around and to be honest after six years of two posts a week, I'm looking for some ways to change things up.
Using my phone in the vertical position for that video was really dumb. I just went back and that video was painful to watch. The good news is that for this video I switched to my GpPro5. The bad news is that the audio is terrible and my presentation compounds the problem. I'm learning a lot by making mistakes and I hope some day to make one of these videos that I can be proud of. 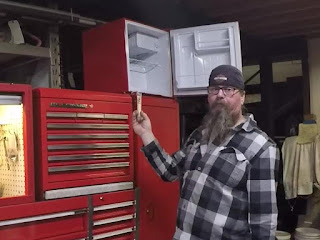 You know one of the things I need to work on is to plan out what I want to say and lay it out in an interesting sequence. That won't happen in this video because at some point I was drawing a blank, didn't have a plan, didn't want to edit a bunch of crap together, and just threw in the towel. I titled this post Take Six because this was the sixth attempt at filming this scene. Once I tripped, once I stepped on my own tongue and another time I stood there with an even stupider look on my face than I normally have. Bear with me while I try to get comfortable doing video, and as always please feel free to comment or offer advice.

Email ThisBlogThis!Share to TwitterShare to FacebookShare to Pinterest
Labels: vlog