Let me start out this post with a big GRRRR! Don't you hate it when this happens? The weather has been warm and sunny until today when it turned cold and wet. You get home from work wondering if today is the day you see if the furnace is gonna run another season. You gather up your beer and Oreos, find a blanket and snuggle into your favorite chair to do some surfing on the net. You turn on the fake fire place for some extra heat and then two clicks and a swipe later the mouse batteries go dead! GRRRR! Commence de-snuggling operations and go find some batteries only to discover you're out. Double GRRRR! Lucky for me my wife had two stashed away and saved me a trip to the kwikky mart.

Heres another thing I hate when it happens. You post an item on marketplace or whatever format you're in to and someone replies and wants to come pick it up. Arrangements are made but the dickhead never shows up. Here was the item: 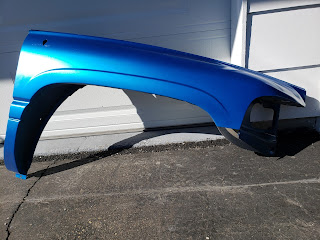 Its a fine looking fender and it ought to be because its never been installed. I was asking $40 just because I felt I shouldn't just give it away but I wanted it gone. At some point during these transactions I told a guy I would rather throw it in the dumpster than dick around waiting for someone to show up. That guy ending up with the fender but the guy before him just disappeared. We made the arrangements after two days going back and forth. He was working this day, I was working the next. On the day we finally agreed upon I shot him a message that I was home and he could head over. He said he was on his way. After three hours I shot him another message. Nothing, not a peep. Just crickets.

I spent a couple hours working on diy projects and thinking about why a person would want to mess around with someone like that. I mean its not like I was in need of the $40. I just figured it was a fair deal. Someone would get a deal on a new fender and I'd have less crap to deal with. I finally looked up his profile on facebook and discovered he is from Minneapolis. WTF? He must have been messin with me. Oh well, nothing lost. Shortly later someone else responded to my ad and this time I looked at the profile first. He was from a few miles away from where I work. I told him about the last dickhead and if he hurried over right now it was his. Sure enough he was here right when he should have been. We talked about dickhead dude for a bit and when he got to the point where he would try to shave a few bucks off the price I stopped him. I said if you're looking for a deal then I've got a sweet deal for you. It was dark but with the trusty glow of my pen light I always carry we headed out around the garage and I showed him this: 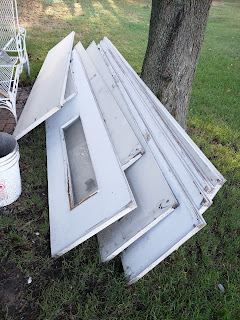 Yes its my old garage doors. They were stripped of all steel parts and were just the wooden panels with two panes of glass. I told him I was hoping to find someone with a burn pile or other means to get rid of these doors. If he took the door panels I would give him the fender. I even sweetened the deal with two cans of color matched paint for the fender. He thought about it long enough that I figured he was gonna tell me to shove them door panels where the sun don't shine but eventually agreed. I helped him load the panels and fender and he drove off into the darkness. I was and am happy with that deal and thats what deals are all about. I tell the story about getting my area clean and he probably tells a story about a free fender just for throwing some crap away. Its not always about cash and I think most of my best deals didn't involve any coin. I can't think of any of those deals right now but the bottom line is that we each had something the other wanted.

Yesterday at work I was telling the story and it occurred to me that when that first dickhead asked me where I was located I just told him Princeton. I had to wonder if there is a Princeton Minnesota and sure as shit there is and its only 30 miles north of Minneapolis where his profile says hes from. I live in Princeton Wisconsin. I'm curious how much time he spent looking for my house and if he asked himself why someone would mess around with him like that.

Maybe I'm the real dickhead in this story?