Strimmers. A name given to string trimmers to quickly denote them from other forms of trimmers I guess. Kids nowadays can't leave well enough alone and think they need to invent a new word for everything. It doesn't save time saying strimmer if you have to explain what it means. If string trimmer was spoken the first time there wouldn't even be a break in the conversation, and yes I think I'm getting to be an old codger.

Its trimmer repair season at my bench and we're gonna look at two I worked on this week. The first is a Ryobi that needs some work on the cutting head but look at the way the customer has this thing assembled. 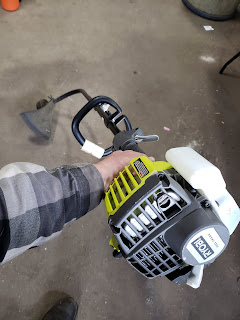 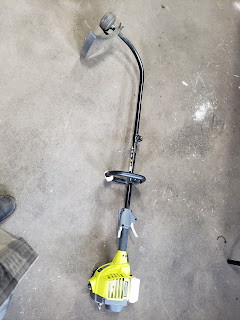 I spun the front handle around before taking the pic. Either they are running the engine upside down and using their thumb for the throttle or they are trimming the underside of something. Yes the obvious reason is for sidewalk edging but this story wouldn't be nearly as interesting if it made sense and trust me, a lot of what I see makes no sense.

The next unit is just cool. Ape hangers on a trimmer. Check it out. 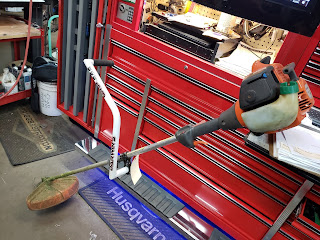 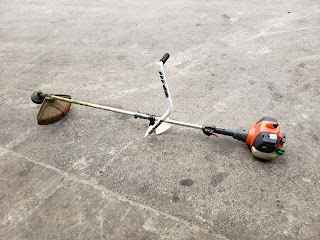 I played around with the feel of this setup and just like motorcycle ape hangers I think its uncomfortable. Having said that, this setup is very close to fitting me and I may modify my own trimmer. The idea of the front handle being higher does allow a person to stand up straight while trimming but in this case its a bit much, at least for me. I wouldn't be surprised if the owner starred in basketball as a youth.

Trimmers are an interesting piece of equipment and seem to be the most neglected item I see. If it runs crappy but still turns the head just a little you can still kinda cut grass. You can't do that with a chainsaw. For the most part people just want me to get it running again for as cheap as possible because they hate the task of trimming but there are a few exceptions. I called one customer to give her the bad news that it wasn't cost effective to repair her broke ass trimmer. She talked about it like it was a family member so I brought it back to life (at considerable cost). When she picked it up she was thrilled.

You just never know and thats why I have to treat each repair item as if it were gold...right up until the point where I get permission to throw it in the recycle dumpster.