Its a sad day in the Automower community as we've lost another loyal lawn mower. Let us bow our heads and say a little prayer for the mower formerly known as Badger Central.

You cut my lawn rain or shine,

While I sat at home and drank my wine.

To end this way does really suck,

Squished flat by a UPS truck.

The lawn you kept was neat and clean,

Rest in pieces you green machine.

This mower was one of four that were part of one of our earlier installs. The machine had 8,572 hours on it and traveled a total of 11,889 miles while performing its lawn maintaining duties. The mower on the right is a similar model. 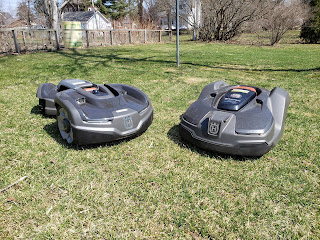 This is a pic of the scene of the crime. 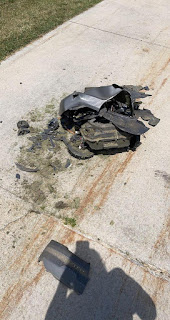 Ya its a total loss. Mowby Dick, my personal Automower, was salvaged after being run over by a skid loader but that was more of a glancing blow when compared to the way a UPS truck monster trucked this poor thing. A mere handful of parts might be salvageable and most of those are just screws. Heres a pic of the way I first saw it. 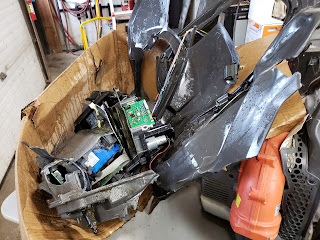 Scattered in that box are all the parts of this machine. Its toast and I'm outta here.