There are a lot of twisty scenic country roads here in Wisconsin. Many of them are southwest of where I live. One sunny summer day I was making this trek in search of undiscovered roads when I came across a bike for sale. Funds were kinda tight but I decided to turn around and check out the bike. You never know how much someone is asking until you investigate.

It was a 1984 Honda 750 Interceptor. The bike was complete, ran well but did show signs of its age in the paint and body work. Asking price...no not ten dollars. He wanted 1500 dollars. Cool. It seemed like a good deal. Maybe I could raise the funds and negotiate a better price.
I continued on with the ride. Theres a point about an hour from my house where I often stop for a soda and use the restroom. Its a casino. On this particular day I decided to throw a ten spot at a slot machine. No kidding after just a few pulls I won 1500 bucks. I figured this was a sign. I needed to buy that bike but after careful consideration I decided on something different. I rode home, picked up my wife and brought her back to the casino for dinner and some gaming.
The machines were loose that night. I kept winning. In the end I had enough to buy the bike and then some. And so I did. 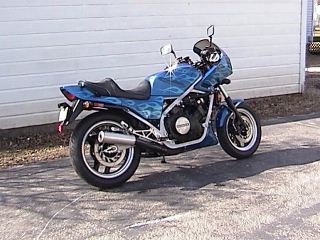 It turned out all right. I rode it for a while and finally sold it to a co-worker who learned to ride on it. He later traded it in on a new bike.
Where do all the sold bikes go? It would be nice to know if this one is still on the road. Maybe it was wadded up? Maybe its rusting in a shed somewhere. I know it was running good when it was traded in. I like to think someone is enjoying it. Maybe they are on a ride right now and they just noticed a cool bike for sale along side the road...