My wife is so wonderful. When a co-worker expressed some interest in selling her sportster, my wife jumped on the opportunity to buy me an awesome anniversary gift. She knew I had been thinking about getting a Harley and she also knows I enjoy projects. Thanks Honey! 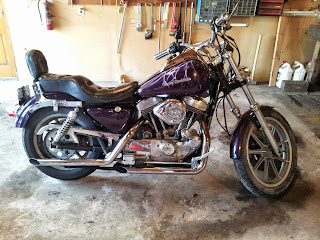 The bike had been sitting for a while and had some issues. I was able to ride it around the block but it wasn't quite right. At first I thought it was just a gummed up carb but I soon realized it was more than that. As it turns out it had a cracked rockerbox.

I could have just replaced the rocker box but I also found an issue with a transmission cross shaft bearing. Someone tried to epoxy it back in place after it had worked its way out of the case. I did a little research and found out this was a common 4 speed problem.
I wanted something reliable and I didn't have a good feeling about this engine. I took a chance on an ebay engine. I found a seller that was showing videos of the running bike before harvesting the engine. I found one that sounded good and bought it. Ya I was a bit nervous about buying an engine this way but as it turns out I got a decent one.

The bike is an '89 and my new motor is a '99. Seems simple enough but as it turns out there were quite a few differences in that 10 year stretch. The wiring harness is different but that didn't matter as someone had already raped the wiring harness on the bike and left it for dead. The old bike used a separate ignition box, the new engine does not. The oil pump on the old motor had one more port than the new motor. I managed to get everything correctly plumbed on the first attempt. The new motor was belt drive and I converted it to chain drive because the old chain and rear sprocket were in good shape.
The clutch release mechanism is also different. The strippers I bought the motor from removed the derby cover, pulled out the clutch release mechanism, and disconnected the clutch cable. They then put the cover back on without the release mechanism in there. When I called them on it they claimed thats just the way they do it. "We sell a lot of those". Not to me you don't. I explained that it is assumed all the parts are behind the covers unless stated in the description of the motor. Just like I assumed there were pistons in the jugs even though I couldn't see them. They sent me the parts.

The thing that bit me in the ass was the crank case breather. The '89 had a vent port in the side cover near the area of the oil filter. The '99 is a head breather. I didn't know the term "head breather" until after I had problems.
I rode the bike to work for a week and didn't have any problems until the day I decided to take it on the interstate. I didn't realize it at the time but pressure built up in the case and eventually blew the cap off the oil tank. When I got to my destination and got off the bike I was immediately freaked out by all the oil dripping off the bike. This explains why the rear tire stepped out on the off ramp. It was covered in oil.
I added two quarts, fabricated a temporary tank cap and started heading home. I went ten miles, added more oil and continued another ten miles where I added more oil. This turned out to be the end of my ride as the battery was now dead. The dead battery was a separate problem from the oil issue. I was just lucky enough to be hit with two major problems on the same ride. Modern technology to the rescue...I called for a trailer and took up residence on the curb. Thanks uncle Tommy! 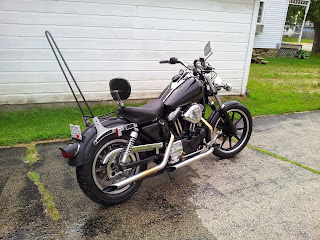 This is the way the bike sits now. I'm just trying to get some miles logged on it so I can get a feel for what it wants to be. There are a lot of little issues that pop up and I'd like to get them all sorted out before next years riding season.
I consider this the starting point of this project. All that other work was just to figure out what I had.

Email ThisBlogThis!Share to TwitterShare to FacebookShare to Pinterest
Labels: sportster