That was the question I was asked on Tuesday afternoon. Crap, I forgot my faithful audience would be expecting some witty gem on Wednesday morning. Writing this blog isn't something that comes naturally to me. I'm the quiet one sitting in the corner with nothing to say. I'll participate in a conversation but I'm not usually the one that starts it.
I've been trying. My role at work is a mechanic but has included selling mowers and chainsaws in the showroom. This started out being pretty tough but I'm doing better lately. I can comfortably talk about things mechanical and I enjoy explaining these things to people that want to understand. This makes lawn mower sales easy for me. I also don't bullshit customers. If they're looking at crap that won't meet their expectations then I steer them in a different direction rather than making the wrong sale.
So back to the question. What am I going to blog about? If this were to be a technical tale then I would need supporting pics. I don't have anything put together for that and now it's already quitting time Tuesday afternoon. I see some of the young guys are in the shop swapping some tires on a truck. A closer investigation revealed the tires were just some worn out mudders. Nothing new to report there.
I could talk about what seems to be the hot topic at the shop...my hair. Really? I've let it get a bit longer and in order to keep a neat appearance I have tied it back. Ya a pony tail. And if you believe the rumors then I guess I'm planning on a sex change too. My wife doesn't particularly care for it this long and in fun she tried to get my mother to convince me to cut it. That backfired. Mom said to let the boy express himself. Hey, when I was a kid I got the bowl on the head or summer shave. In High school I was under my parents roof and had to follow their rules. At 17 I joined the military and that was the start of 21 years of constant haircuts. When I got out of the service I kept it shortish because my wife liked it that way. Now it's time to let it grow a bit before it all turns gray or falls out. But we'll just brush off that topic, I don't want to talk about hair.
So what is this blog gonna be about? I'll tell ya. Frosty, from the landscaping crew, walked into the office and slapped this guy on the counter. 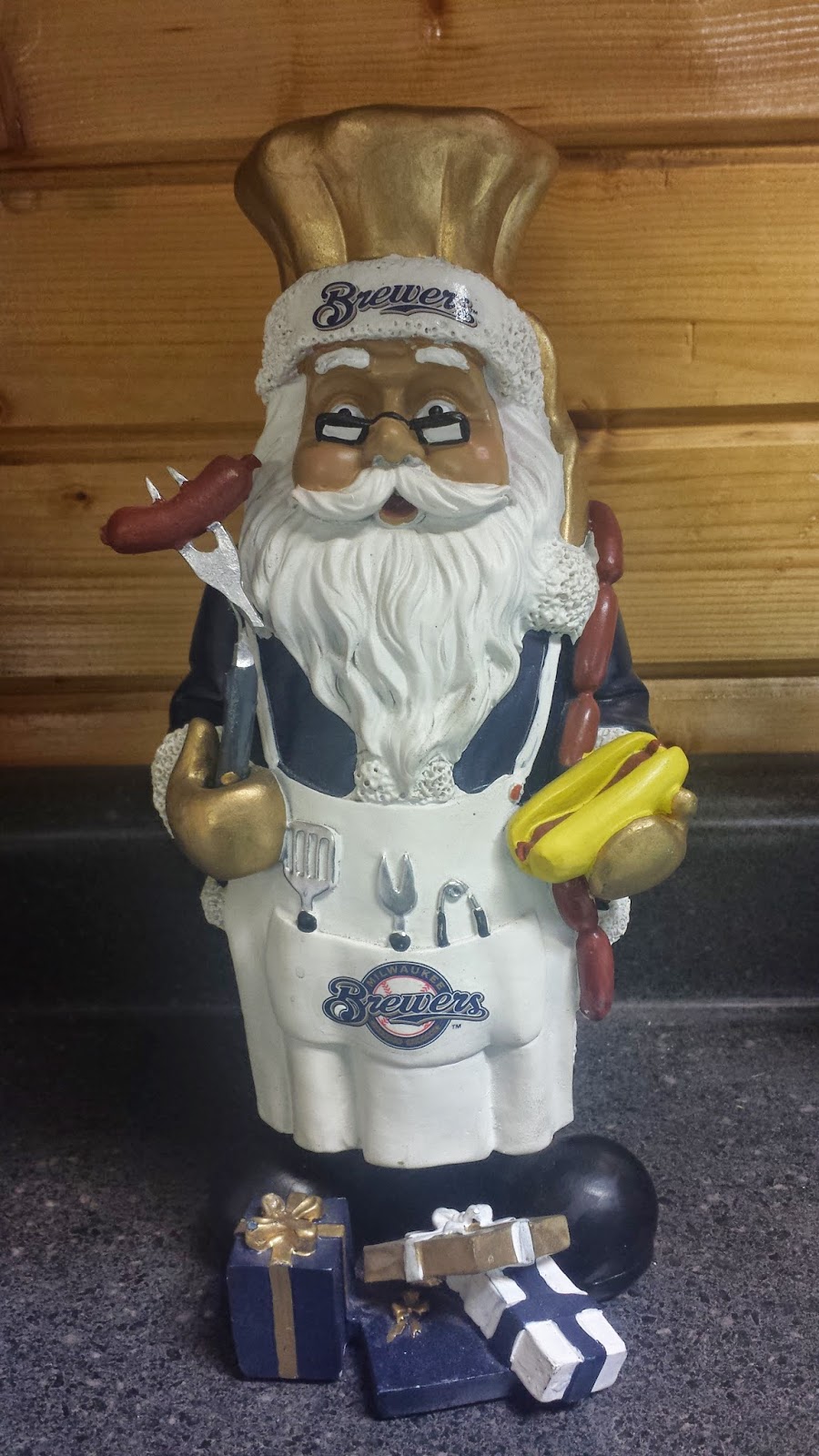 A Milwaukee Brewers Santa gnome. He stands about a foot tall although when discovered he was on his head. I like him. Is it because he has a full head of hair? Maybe because he has a complete set of tools for the job? Nope. When I first saw him I thought life has been throwing this foot high, over weight, butt ugly dude nothing but scraps and he ground them up and made brats.
So there it is. Do the best with what you've got and try to deal with a bad situation as best you can. That's what I'm doing.