Last Wednesday at the end of my post I mentioned that if the sportster started I was gonna ride it to work. Well the damn thing fired up so I got the gear on and headed towards the gas station to pick up my morning bottle of orange juice. The temperature was in the mid thirties and the road was dry. No problem. As I walked out of the kwiky mart someone spotted me and asked if this was a new to me bike.  I explained about the new Ultra Limited and how I've had this sporty for a while and if I was gonna dump a bike this morning I wanted it to be this one and not the new one. His comment was "Ya, it's dark, foggy and wet, what could go wrong?"
He was right. The roads weren't frozen but they kinda sweated and it just happened that quick. Even the lot we were standing on was dry just two minutes ago. With the salt residue on them they made a brine and were kinda slick. I threw a leg over the sporty and carefully headed back toward home. I did a few brake tests and dragged my foot across the pavement trying to determine if this probable last ride of the year might end up my last ride forever. As I slowed down in front of my drive I couldn't help but think what a puss I was for giving up on this ride. I cracked the throttle open and did a power slide around the next corner followed by a block long wheelie while screaming "Yee Haw" in my helmet! Ok, that last part isn't true but you get where my head was now at. I did whack the big bore sporty a bit just to make sure traction was ok, and although the ass end started coming around, I determined traction was "just ok" and proceeded on. 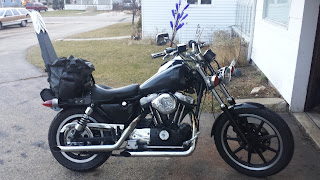 The back roads were dark and quiet and had less salt if any but there were a few low spots that seemed slick. At one stop sign I did have to engage my outriggers. My work boots actually had much more stopping power than my worn rear tire and I'm still not sure if that was ice, salt brine or just an oily spot.
I saw fifteen deer. I suppose I was in close proximity to about a kajillion more. No close calls, no pucker factor, just a cold ride to work. The sporty has no windshield or heated grips so I would compare it to a snowmobile ride with the wrong gloves on. 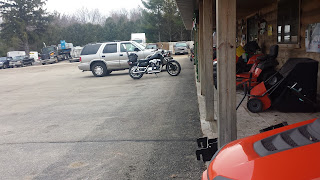 Later I rode the bike to lunch. I guess people aren't expecting to see a bike on the Wisconsin roads in December because I got a lot of waves and thumbs up. I was just doing what they wanted to do but had some excuse not to. Common sense may have been their reasoning.
I didn't want to leave work and ride home in the dark with greasy roads again so I left a bit early. I was able to go for a nice ride without worry and had a good time. Sure it was cold but I was enjoying everything else so it was easy to forget about the temps. When I stopped at the kwiky mart for evening refreshments, everyone had something to say. Even the folks that would normally tell me to go do something naughty to myself had a cheery comment. The one thing that everyone has in common with the person they're standing next to is the weather. Good or bad it is something we are all subjected to so when they see a bike in December with all this mild weather we have been having, well something has to be said I guess.
When I got home I discovered why my right leg was staying so warm. 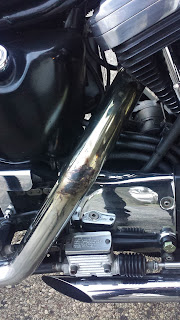 I suppose my riding pants aren't waterproof anymore. I'll have to get some wrap for that pipe before I even think about replacing the pants.
Kudos to the guy I spotted the next day. He was tucked in behind the windshield of his big twin while rolling down the hiway in the cold pouring rain, just as it was getting dark. I gave him a thumbs up from my warm truck as he gave me a nod I interpreted as meaning, "That's right, I rode mine today, what's your excuse?"
Posted by Scott Seidl at 9:23 AM