One Season On An Ultra

This spring I pulled the trigger on a new bike purchase. The bike is a 2015 Harley Ultra limited. I knew I was gonna buy another bike but didn't have my eyes on one this big. I figured for a solo rider it was overkill. I'm married so why am I a solo rider? Fifteen years ago I hit a deer while riding a Kawasaki Voyager. That incident earned me a week visit in the hospital and also marked the end of my wifes desire to ride. She figured someone had to be around to raise the kids and that's when I became a solo rider.
To my surprise, while shopping for another bike, she expressed a desire to ride again. The kids are all either in or through college so she no longer had an excuse not to ride. And ride we did. We went on a lot of day trips and a few overnighters. The bike now has over twelve thousand miles on it. Considering I have two other bikes that got some use this year I'd say I have a bit more than just a "bar hopper" attitude towards riding. 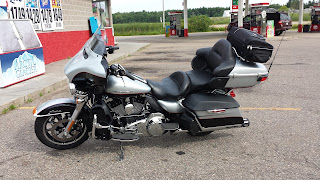 So what do I like about the bike?
First, it's a big bike with plenty of storage space. We easily packed for overnight stays plus stored rain gear and cold weather gear on the bike. It was built for two up riding and does it well. I rode it solo for a week long vacation in the Smokies and had so much extra room that I brought a second helmet. The plan was to experiment with some of the bluetooth and voice activated features but the weather never got crappy enough to switch to my full face helmet.
Second is a feeling of confidence. I'm not saying I don't think a new Harley will break down. Heck, I've had a few recalls on the bike already. What I mean is that there are dealers everywhere and where there isn't a dealer, there's an indy mechanic that knows HD like the back of his hand. 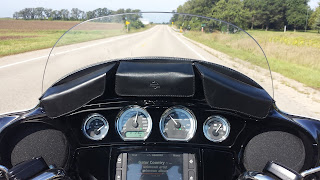 Third is the "infotainment" system. I enjoy the tunes and have become quite accustomed to the operation of the radio. It now seems very natural to operate. The gps works well enough and I like the fact that it's built in and not an accessory hanging out on the bar or velcroed to the dash. The one time I used the cb it worked fine and the truckers chatter warned me of an upcoming accident/backup that I was able to avoid. The weather band radio is a nice feature and the ability to link my phone to the bike to make and receive calls is a feature most bikes can't handle.
Fourth is the whole package. What I mean is that I like the feel of a v-twin and the protection offered by the bat wing fairing and lowers. The bike is smooth and comfortable with decent power, the mirrors don't vibrate and the extras like heated grips and seat all make it easy to rack up a lot of miles.
What is it that I don't like about this bike?
First, it's a big bike. This bike weighs in at over 900 pounds. It's a pain to try to maneuver around in and out of parking situations. If I ever tipped it over it would have to lay there till I got some help.
Second is the feeling of confidence. I've seen more broke down Harleys than any other brand. Maybe it's just because there are more of them on the road. Sure there are a lot of dealers but as I learned when I was shopping for this beast, not all dealers are ones you want to deal with. The first two places I stopped at treated me like I was wasting their time. And then you have everyone and their brother that thinks they know how to fix these things. The service manual for the electronics is a tad thicker than the service manual for the rest of the bike. 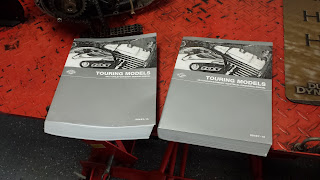 The book on the left is the factory service manual for the bike. The one on the right is for the electrical system of the same bike. Yikes!
Third is the "infotainment" system. I've had no problems with boredom while riding bikes that didn't have tunes. The voices in my head keep me company. I suppose the radio could be a distraction and I may have become one of "those guys" whose radio you can hear as they cruise past. Do I really need to make a phone call while riding? Maybe.
Fourth is the whole package. You know how when you get a different vehicle that you all of the sudden notice a lot of that model on the street? There are a lot of bikes out there that look just like this one. I've always gravitated towards bikes that were just a bit different. Not with this bike. Even custom paint would just make it an Ultra with custom paint. And how about the features this bike is missing? To me it would make sense to have an onboard compressor for the air shocks. I'm always switching between solo and two up riding and I just suffer the rough ride when alone rather than dink around with the hand pump. And how about a tire pressure monitoring system? It seems that should be included in a top of the line offering. Liquid cooled heads but no temp gauge? Come on man.
Overall the pros outweigh the cons and I enjoy riding this bike and look forward to each outing. Now if they could just figure out how to offer something like this in a 500 pound package.