I mentioned that I now have a gopro camera and that I needed to figure out how to use it. Last week we got a bunch of snow and I decided to mount the camera in my plow truck and capture some footage. I have a larger battery in it so the plan was to just turn it on and forget about it. I got two hours of video before the battery died and now all that was left was to edit it. Having never done anything like this before, I was in for a treat. 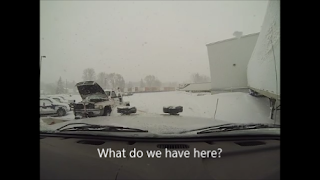 My goal was to get that two hours condensed into a two minute video. Yaaaa, that ain't gonna happen. I did get it down to 15 minutes but that's still way too long. I wouldn't watch your 15 minute video of snow plowing and I don't expect you to watch mine. I did however learn a few things about using my video editing program and I wanted to post something. I made a short video of a broke down truck. The video sucks and was really just an exercise in editing. Having done this once I now have a better idea of the mechanics of using the gopro. For example, I should have used the skeleton back to better capture audio. I also have a better idea of the viewing angle and how boring a video can be when the camera doesn't really show any action from the point it's mounted. If my plowing video had showed even a little bit of me or the steering wheel it would have been much more interesting.


My plan is to make and edit a few of these before riding season gets here and maybe provide you with some motorcycle footage worth watching.
Posted by Scott Seidl at 8:20 AM