Todays blog is about Brookes broken back brakes. I brought the bike with the busted binders onto my bench. Before I could break loose the buggered bolts I had to blast them with busterloose. Bringing the brakes back to brand new condition was but a matter of breaking the bits down to their base configuration and brushing some grease on the bushings. Because the backing plate was breaking out with little blisters of rust, buffing was not my best option. Bringing it back to its original luster was best done by hand.
Enough of that bull. I just had a bug in my butt to be a bastard. 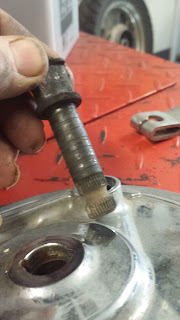 The brake shoe cam was in need of some lube because the original grease had turned to a sticky gunk. I suspect the steering neck bearings will look the same although I may luck out with the swing arm bearings. This bike has grease zerks for those and just maybe someone greased them in the last thirty years.  Either way, I plan to go through the whole bike and make sure every part works as it should. We dasn't neglect the brakes as that would go against the #1 rule of riding...never outrun your guardian angel or as I interpret it, don't ride faster than your brakes.
While I had the rear hub apart I figured it would be easiest to polish that chrome now. There is some pitting so I had to be careful not to scratch the good chrome. It turned out alright. 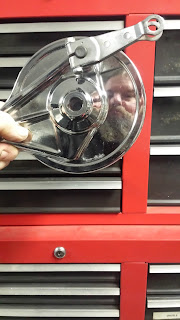 Lookin good. The chrome looks decent too.
And finally, a short video for Brooke so she can see what I was telling her about the sticky brake pedal.