I've known from the start that if the Rebel was gonna run again I would have to go into the carb. Its not that big of a deal but on a thirty year old bike you never know what parts may no longer be available. You also don't know what others before have left you to deal with. For example, buggered screw heads. Hey, if you stripped it taking it out, why put that shit screw back in the bike?
Right away I could see the choke cable adapter to the carb was broken. Its broken on the spare bike too. These used to be made from brass but now they are plastic. 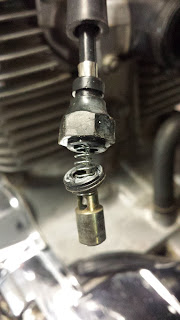 I did get lucky because I was able to unscrew the broken piece out of the carb without cutting the cable. I was also lucky to find Honda still offers that piece. The unlucky part is that it cost $34.
One part that doesn't seem to be available is the fuel pump diaphragm. The pump shaft was bent and I'm not really sure how that could have happened in normal use. I suspect it was bumped or messed with by a previous mechanic. Brooke did complain about the throttle sticking but I don't think a bent shaft on the pump would cause the throttle to hang on this CV carb. I'll take a closer look when I put it back together. Also the rubber diaphragm was quite stiff. So what do you do to soften up the pump? 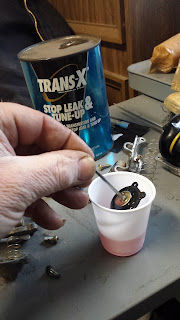 To be honest I don't know but this is what I'm trying. I think this transmission tune up magic juice may help. I've heard that these stop leak products soften rubber seals. I figured it was worth a try so
I soaked it for a week or so and it is much better. The carb is back together and on the bike but I gotta seal the tank before I can put gas in and fire it up.