Here is another story about how Harley Davidson has figured out how to get me to lay down my hard earned cash to put the final touches on the bike they started but never finished. This is what the rear of my Ultra Limited looks like: 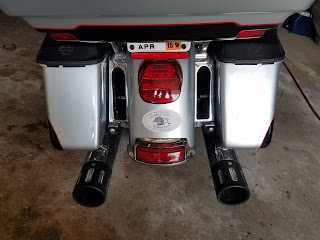 What is the deal with those big holes on each side of the fender. It really looks like something is missing and I know I'm not alone on this because when I ordered the lights that HD offers, they were on back order. 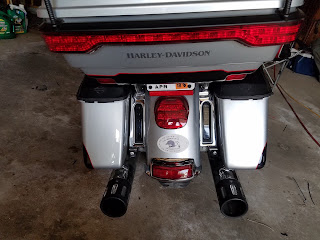 Here is the bike after the install. It looks a lot better, even with the lights off. I've added a lot of HD lighting to the bike and the nice thing is that they all were direct plug-ins. No splicing is required. 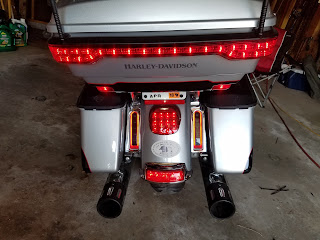 With the tail light on you just see this glow around the outer edge of the light housing. They look orange in this pic (at least on my puter) but I assure you they are red like the rest of the lighting in the pic. The main tail light below the plate is an led upgrade. 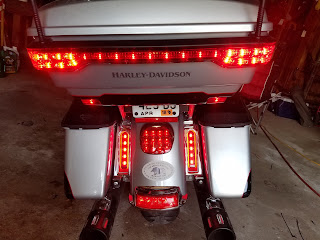 And here they are with the brake lights on. Actually I took this pic alone with the hazard flashers on, thats why the center light is just tail right now. It only took three attempts to time my camera shutter with the bike flasher!
This mod cleans up the appearance of the back of the bike with the added benefit of being more visible to people behind me. Harleys top of the line CVO models don't have these holes or a place for these add on lights. I don't think they come with the lower fender light either. Huh, I guess less costs more.
When I bought the bike the original plan was to get the trunk removal kit. If the trunk came off then I would need to add turn signals and the kit they were offering had some cheezy lights that went on the saddle bags. I guess that option is back on the table with these new turn signals.