Sometimes a difficult job comes along that has special needs, and requires special equipment. A tree removal project on a steep hill has provided the need for a winch.
We want to pull logs up a hill at a fairly quick speed and we want to do this for the better part of a day. An electric winch would never handle our needs so the boss found a used hydraulic winch that he wanted mounted on the front of a skid loader. Our plan was to use a blank skid loader attachment plate and just make this thing a universal attachment that runs off of the implement hydraulics.
The start point of this build was an I beam that was just standing there in the corner begging to be used for a project. Because the winch fit in the beam and the beam didn't need to be cut to length, I decided to use it. 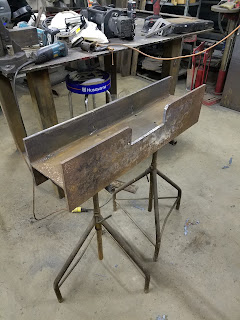 This is one of those projects that was based on a loose idea and the details were worked out as it progressed. 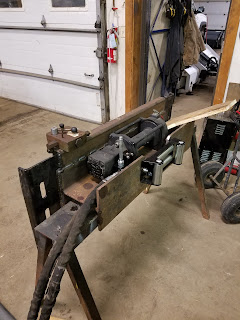 A few of the things to be worked out included the matter of hydraulic flow. The first issue is that this winch isn't rated for the kind of flow and pressure our equipment produces. Also, the in and out function is electrically controlled to switch oil flow and reverse the winch. That won't work with a skid loader that can also reverse the flow between its hydraulic lines. The simplest way out of this mess was to bastardize the cartridge valve in the winch manifold and let the machine functions control hydraulic flow. The electric handheld control that came with the winch is then eliminated.
Another issue was safety. If the winch cable were to break under load it could cause a lot of damage or maybe hurt someone. For this reason an expanded metal screen was built to protect the machine operator. 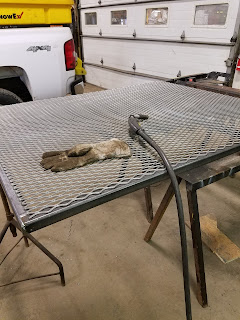 Another area of concern was winching against the parking brake. Different machines use different types of parking brakes. Some are locking pins and some are just applied brakes. Still other machines disconnect certain hydraulic, motion control or auxiliary functions when the p brake is applied. To aid in keeping the machine from moving, it was decided to make a small blade with spikes that could dig into the ground. 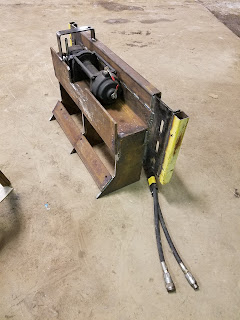 This is where the project stands today. We were gonna send it out for blasting and paint but decided instead to assemble it and do a few test runs, tweak whatever is needed and then send it out for paint. That's gonna happen here as soon as I get caught up. I was trying to get my new plow truck tooled up first but then a snow event set me back some. While all that was going on the incoming chainsaw repairs were backing up. I'll post more pics soon.