A while back I told you about oil oozing from my air filter. This was due to high heat and a way full oil supply. I recently did an oil change and made sure to keep the oil down at a reasonable level and away from the full line. After that I decided to clean the air filter. This one is called the Extreme Billet Ventilator. It has a washable KandN filter and now was the time to start saving money as advertised by cleaning the old filter. By the way, for the amount I paid for this air cleaner, it will never pay for itself. In fact, for that money the damn thing outta clean itself. 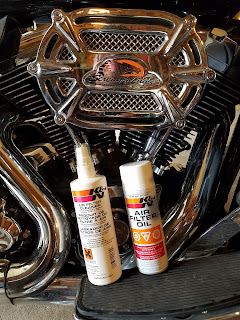 I did not have to go out and buy the cleaner and oil. It was found lurking on my parts shelf. I think it's left over from the Aprilia. Sometimes it pays to be a pack rat. 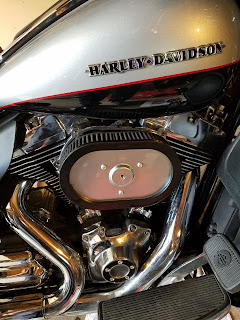 Six allen bolts removes all the screaming eagle made in china decorations. Loosen three more bolts and off comes the filter. I think the amount of bolts used in this setup should keep it from vibrating off and littering the streets. I only mention it because my other Harley is a nasty litterbug. 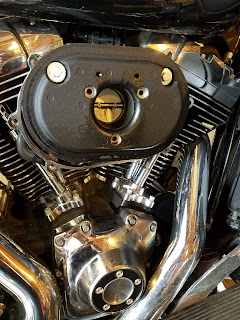 The cleaning solution does a nice job of removing oil. 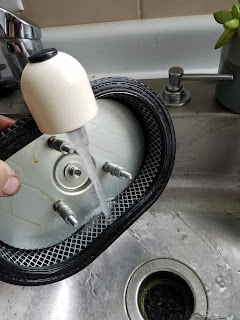 It even got this messy rain sock looking like new. 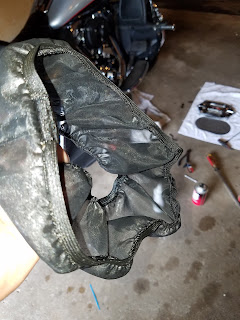 I guess my phone was hungry because I think it ate the rest of the pics I took that day. Anyway, after the filter has dried the filter oil just sprays on like you would use a can of paint. It doesn't take much and you don't want oil dripping from the element. Some blue loc-tite to keep everything in place and this job is done.
I just looked at the calendar and it seems my vacation is less than four weeks away. I gotta get on some more of this maintenance before the big trip. I just did the front brakes and fixed an air ride issue. Still on the list is replacing the rear tire, tranny and primary oil changes, investigating some finicky led lights on the fairing, and adding some music to the thumb drive. Another thing I need to do is empty the tour pack and see what is all stashed in there. There's a good three inch layer of tools, parts and hats/gloves spread out across the bottom.
I think I'll ride the sportster to work today just to mix things up.