Some of you may have taken four or more days to enjoy the holiday weekend. I did not. I volunteered to work Saturday and Monday although I could have taken them off if I had made plans. The few plans I did have mostly fit in around business hours at work. Good thing we were open because a lot of people were at the store for rentals, repair work, landscape supplies, grilling pellets and lp tank refills.
One guy was a dick otherwise the customers were all in a pretty good mood. I was the only person in the shop that was available to hook his chainsaw up to a computer to check for error codes and I was 15 minutes behind schedule for leaving to do some of those plans I just talked about. He didn't care and insisted he couldn't leave his saw behind because he makes a living with that saw and uses it all the time. All the pros I know that make a living cutting wood have backup saws. I didn't bother to tell him this or even argue. I just grabbed the saw and took it into the shop. When I hooked it up to the computer it revealed that it had 20 hours of run time in two years. If he makes a living with this saw he must have a really high hourly rate. I was kinda pissed after seeing this and asked Greg if he would take the saw back up front when I was done with it. I was afraid I'd say something smart and blow another sale they had worked out. Sometimes it's best to just separate yourself from these situations and that's what I chose to do. I mean the guy was such a dick that after he left the boss told me he was surprised I didn't tell him to piss off.
After leaving work Saturday we went to a 50th wedding anniversary party.  We met some relatives that I hadn't seen since we were married 29 years ago. I'm quite the social butterfly and like to keep up with people every few decades or so.
Sunday we rode through some heavy rain to visit a friend. It was one of those rides where you start and finish dry but somewhere in the middle of the ride you were wet. The outcome of that visit may be a used dishwasher purchase. I'll have to go back to pick it up because it wouldn't fit on the bike with my wife and she wasn't willing to hitch hike home. That ride also included a stop at the Harley dealer for some front brake pads. This will be the third set of fronts. I understand that most of my braking power comes from the front end and I exercise that every time I stop. Muscle memory will save you when you need to react. 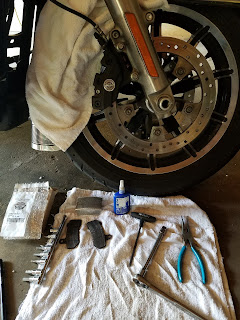 Monday after work I rode the sportster to meet my wife and some of her relatives. I took the sporty because I knew the driveway which is about a hundred yard long path through a field, was full of soft sand and ruts. Based on my performance with that smaller bike, I know I would have struggled or even dumped the Ultra. Seventeen years ago was the last time I was on that drive and I was on a Kawasaki Voyager. I almost got stuck and dumped that bike and didn't want to repeat history.
When I left, there was an opportunity for me to stop for a minute and I was going to turn the bike off but the switch felt odd with a lot of resistance. This is the second or third ignition switch in this bike and I felt if I turned it off I would be stranded. I forgot about the switch and continued on my way. "My way" was the slow route home. Just chillin on lesser travel back roads. Lately I've really been taking it easy and driving around like a tourist. There was a time when I'd fly over this one lane bridge so fast that I'm sure those yellow and black signs were shaking. Today I actually slowed down enough to look at the creek flowing under it. Not sure whats going on here but I'm not holding anyone up or breaking any laws so for now I won't get too concerned. 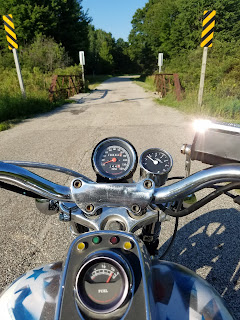 I can't decide if summer is going fast or slow this year. The calendar says we're into summer but the crap weather has made it feel earlier in the year. I think we may be in for some heat next week so my feelings may change on the matter.
When I got home I parked the bike outside, opened the garage door and made a mental note of where the fire extinguisher was. I just had a bad feeling. When I tried to turn the ignition switch off it didn't want to move until I forced it a bit. The bike died and sparks started flying from behind the switch. 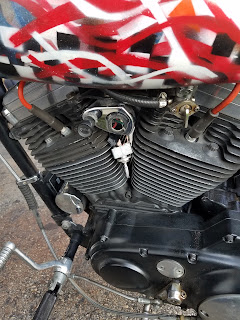 There was no fire and I quickly unwired the switch from the power source. It's a good thing I was doing this at home because I'm sure my bacpac didn't have the necessary tools in it and there is no tool kit on the bike. Only recently did I remove the tool kit and I suppose I should get something back on there.
Tuesday, Independence Day, was open. We wanted to ride and decided our destination should be the movie theater. Afterwards we stopped at Harbor Freight and picked up an air brush compressor. Stay tuned for more about that once I figure out how to use it. BTW, harbor freight and their stupid coupons are really pissing me off. I'm about ready to give them the FE.
The rest of our Tuesday ride included a stop at a farmers market and a scenic joyride. Once home I fiddled around in the shop and then just sat down and relaxed. I'm looking forward to a short work week and another weekend.