Last weekend my wife and I were on a ride and it was pretty hot outside. Not "yea it's warm lets go for a ride" hot, but "crap its hot, pull over and find some shade" kinda hot. We found a park and used the rest rooms, looked at some ducks and stretched our legs. Unrelated to the story but something I had never seen before, was that this small city had their own flag. The US flag was on a pole elevated higher than the state flag which was on a pole next to it and then their city flag same level as the state flag on its own pole. This may be common but after 54 years it's the first time I've ever seen a city flag. Anyway, I usually do a walk around of the bike in these situations to look for problems and sure enough I found one.


It appeared my two year old Harley had an oil leak. At first glance it looked like the front push rod base was seeping oil. 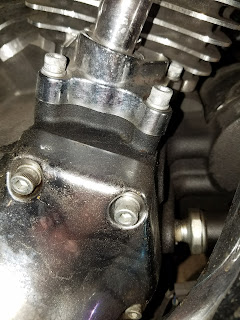 Closer inspection of the oil patterns ruled this out and sometimes you have to back up and look at the whole picture. 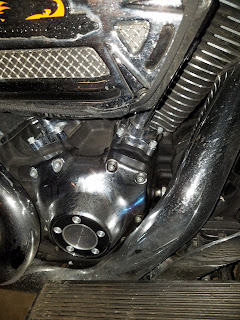 Right above this oily mess is the air filter. It has a rain sock on it in this pic. 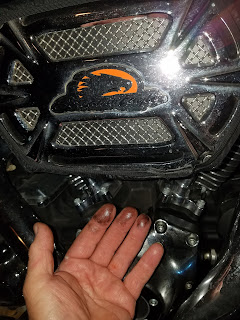 I swiped my hand under the filter and got a big dose of engine oil. Warm temps combined with my habit of hugging the full mark on the dipstick created this mess. I'll clean it up and wash the filter and should be good to go for a while. 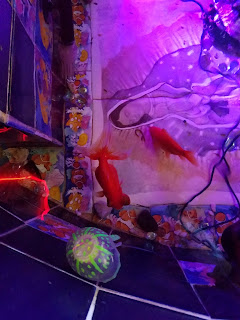 Back to the fish. Is this normal for this fish to have one big eye? None of the other fish looked like they needed their face clamped in a vise to straighten out their appearance. Maybe he got into a fight with another fish and took a fin to the face. Maybe he was doing laps, high sided and hit the wall. All the other fish were quite active but popeye here just kinda stared at the side of the tank. It's like he wanted me to pick him up and help him. I may have to go back and investigate in a few weeks. Do you think the staff at the restaurant will be suspicious if they see me walk in with a small net and a C clamp?