It wasn't all that long ago I reported that my air ride suspension was holding up decent after a year of use. I guess I jinxed myself because I started having problems. As I was riding the pressure in the shocks would keep rising. I'd bleed some air off and a few miles later there would be and extra 10 or 20 pounds in the shocks. When the bike was parked the pump won't run but I would find it with full tank pressure in the shocks, or more accurately, the tank would bleed into the shocks till pressure evened out. If the bike were slammed onto a short center stand then it would have raised up and tipped over.
I emailed DirtyWorks LLC to find out if my suspicions of the up valve being faulty were plausible and if the unit was under warranty. Their reply was to give me cleaning instructions for the valve. That was my plan anyway because I figured they were gonna tell me to piss off. I guess I'm just so used to bad customer service that I have been taking the low road in these matters but this company has been good to me from the start. I wish they offered more stuff I need. 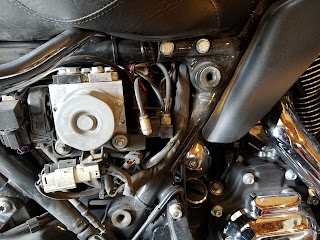 On the right side of the bike behind the side panel is where I've installed the up valve and dump valve. 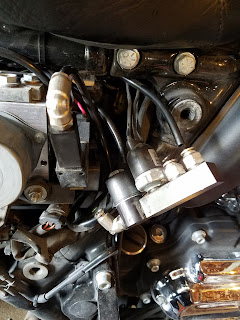 Here you can see the manifold with the pressure regulator switch and our problematic up valve. 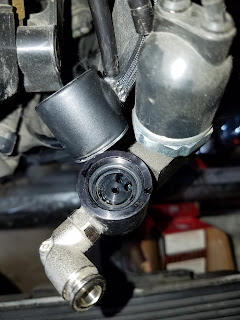 Another look at the same manifold. The regulator switch is still attached but I've remove the up valve solenoid and valve itself. I forgot to get a pic of it but it's just a cartridge with a spring loaded rubber stopper. That rubber stopper pushes against the tiny hole in the center of that valve body. 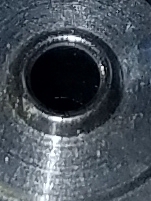 Here is a zoomed in shot of that hole. Notice at about 8 o'clock how it looks odd. It must have been some debris because after swabbing it with a q-tip, it looked perfect. 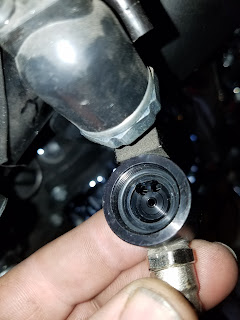 Having cleaned it up nice I reassembled everything and hoped for the best. I say that because my first test was an hour plus ride to Belgium to pick up my wife from a party. Ya, I never heard of Belgium Wisconsin either but I assure you, it's there. I just punched the addy in the Ultras gps and followed her instructions. Yes it got me there but I must have the preferences set to "zig zag" because that was the most messed up ride I've been on in a while. Lucky for me I wasn't on a schedule.
So it has been four days now and the valve is working as it should. Happy, happy happy.