For decades we've been paying the cable company for tv service and the ability to watch an ass load of channels. There's a problem with that and I'm not just talking about the cost. We were turning the tv on just for the sake of having it on and trying to justify the cost. That's really lame. After the last superbowl game we decided to cut the cable and bought an Amazon Firestick. The firestic allows us to stream a lot of different media when we feel the need to veg out in front of the boob tube. My only issue with cutting the cable was that I needed to be able to watch the Packer games and I wanted to do it from home in my lazyboy. I had heard of a lot of people streaming the games but when I tried doing this during the pre season I had nothing but problems. I don't even know the outcome of any of those games.
Now it's crunch time. The first regular season game is today. Earlier this week I was on Amazon and stumbled across an antenna with rotor for $35. Really? Could a thirty five dollar antenna bring the Pack into my living room from sixty miles away? I've blown more money on stupider shit so I pulled the trigger and ordered it. Two days later a small box was sitting on my doorstep. 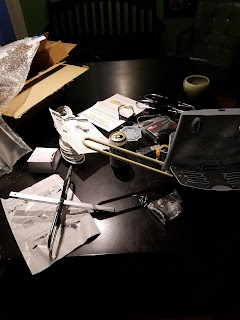 The antenna needed assembly and the whole time I was putting it together I was laughing thinking this cheap thing would never work. To be fair, most antennas are built light and feel cheap but I was still skeptical. I decided to set it up in my living room and if it gave me any type of hope then I would do a more permanent mount outside. 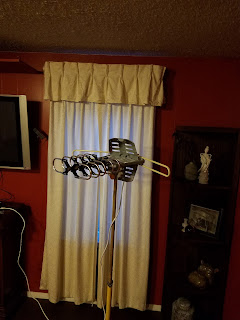 To my surprise I picked up seven different channels with it set up this way. Unfortunately I wasn't getting any of the stations the games are broadcast on. The next day I decided to move the antenna upstairs to see if things improved and improve they did! With the antenna just sitting in the house upstairs I now get 22 channels without turning it at all. The first football game I watched with this setup was the shellacking of Tom Brady and the Patriots by the KC Chiefs. I don't like the Pats and I didn't like the Cowboys during their dynasty or the Bears that one year they had a good season. This antenna is the cure to my "lack of Pack" problem.
The only issue I have is there's a length of coax snaking down the steps, across the living room floor and up the wall to my tv. I can live with it till I come up with a permanent solution and until then I duct taped the coax down in key places so nobody trips on it. Does it look totally redneck? Yes. Do I care? No. It can be picked up in a hurry if the secret service, Vatican or Packer Hall of Fame calls and tells me a special guest is stopping in for a visit. Everyone else can deal with it.
I'm happy with my $35 antenna...so far. The unit comes with an amplifier and rotor and I have to wonder how long those will hold up. Two things I've decided about this move are that it was nice not being exposed to all those annoying commercials. Also, if I have to spend the equivalent of a few months of cable charges on a nicer antenna, I'd be ok with that. Go Pack!