A lot of you working stiffs out there are in the middle of a three day weekend right now. I get two and a half days and that's fine with me. In fact I started wondering what I would do with myself with the extra time off so Saturday after work I took care of some "around the house" crap that's been on the list for a while. I tweaked some rain gutter down spouts, fixed a leaky toilet, fixed a door knob and insulated a hole in my shop wall. Later I prepped the driveway for seal coating which I'll do today. I gotta remember to park the bike in the street before I start sealing the drive or I'll be grounded for the day.
I have to check the dates but I think the bike show that I've been attending in Ripon is coming up in a couple weeks. If you've been following this blog then you know I set a goal to have the BSA running for this show. That ain't gonna happen. BTW, I set the same goal last year and the year before and the year before...
I want to enter a bike in this show and have three choices. 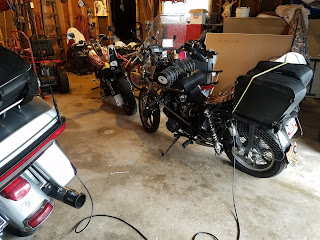 This pic is a first for this year. Three bikes in the garage. I rolled the Rat Turd out of the living room yesterday in hopes of getting it to run right so I can take it to the show. It almost didn't get me home from that show last year which is also the last time it ran. I must think it's a fuel related problem because yesterday I yanked the bank of four carbs off of it. I'll let you know what I find if and when I find it.
The other two choices for the bike show include the Ultra (yawn). Who wants to look at a full size Harley touring bike? Just open your eyes next time you're blasting down the road and you'll see a few roll by in the other lane. The sportster would be the next logical choice but I don't think I'd take it with this current paint job. If I can't get the Rat Turd running decent by the end of the weekend, I may pull the tank on the sporty and squirt some different paint on it. I still have a good selection of rattle cans laying around.