This morning I'm planning to ride to the bike show in Green Lake during their Harvestfest celebration. I'll be taking the back roads because right now the Rat Turd doesn't have enough gumption to handle sustained speed on the hiway. I'll figure that problem out someday but because the bike sees such limited duty lately it doesn't seem to be a big concern. Yesterday I had the idea of building my own carb for the bike. It already runs like crap, so there is nothing to lose. I'll let the idea fester for a while. 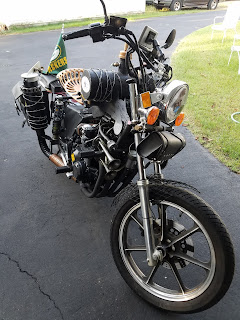 I pulled the windshield off of the bike. It was on there for the trip to the Smokies many years ago and I just forgot how ugly it was and it certainly isn't needed for the few local rides that the bike gets. Yes, of all the crap on this bike, that was the ugly piece. Deal with it. 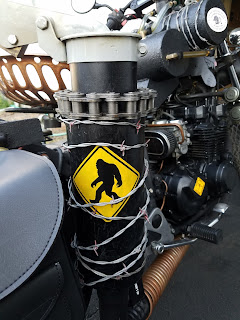 This year on vacation I picked up a few stickers and decided this bike was as good a spot to adhere them as any. 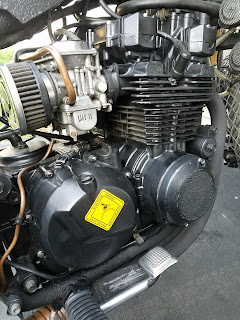 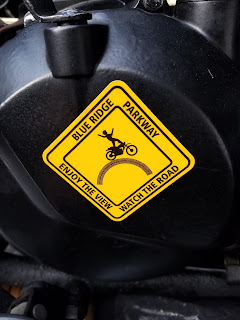 There used to be a few signs on the Blue Ridge Parkway that looked like this decal but I don't remember seeing one this year. I wonder if they were stolen much like the US129 signs that no longer appear along that road. We used to wave our hands in the air when we saw this sign and can't recall doing that this year. The truth is, there are no reducing radius curves on the lower end of the parkway except maybe the one or two that had these signs and I'm not sure if they tighten up or maybe they are just long arcs.
I gotta wrap this up and get rolling. To my wife, welcome home from your vacation, Honey. You were missed, I survived and the house is in one piece, there isn't a sink full of dishes, and the cats aren't dead. To the rest of you, see you at the show.