Earlier this month I made a post about a toolbox hutch I want to build. I've had the shell of this thing sitting in my shop the last three weeks and its been driving me nuts that I haven't had time to work on it. Yesterday after a half day of snow plowing I had the afternoon to putz in the shop. I say shop but none of the putzing occurred in there. I had a bunch of welding to do and I'll do that outside in the garage but not in the heated shop. The problem was that the temperature was zero. Ya you just heard me whine a little but really, who likes freezing their ass off?
Cold sucks but how cold you feel seems to depend on what you're doing. Many of you don't mind a cold bike ride, skiing or snowmobiling but working in the same temps isn't much fun. Well this project is kinda fun so I was able to keep my mind occupied on things other than frozen feet or arctic denutification.

I had to work out some details for the rails of the roll up door. I was gonna build the tracks and just weld everything in place but then a revelation came to me. What if I had to remove the door or replace parts of the door? The design didn't allow for disassembly so the other day while I was taking a dump I realized what needed to be done. One half of the rail system had to be removable. After I built it I came up with another way to do it but its too late for that. No matter, the way I made it will work just fine. 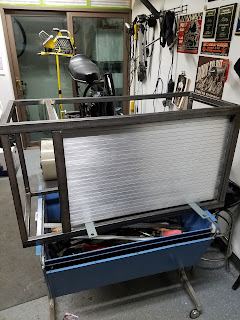 So this is where I quit for the day. The cold in my feet caught up with me as the vision started becoming a reality. Its really just all about getting the ideas out of my head. I know its just a simple roll up door but there are a lot of unknowns that can't be answered until they're tried. Will the door slide smoothly in the rails? How sharp of an arc will the door follow without binding? Those questions were tried and answered on the first attempt but if they don't work its kinda a deal breaker. I still have to make a stop on the bottom of the door, add a lock, lighting, power strip, a shelf, peg board and then wrap the whole thing in sheet metal. I'll keep you posted.