The other day I got to thinking about my grand parents on my mothers side. Visits to their house were always looked forward to. I'm not sure if it was because we lived in the country and visits to the city were exciting or if it was that I looked up to grandpa so much. They lived in a Milwaukee suburb near the Milwaukee river. We weren't allowed anywhere near the river and were brainwashed into believing the river was a dangerous place for little kids and maybe it was. Grandma would say, "You boys dasn't go down there". The only other outdoor adventure on their tiny property was exploring a deep ditch along the property and playing with the dog. "Tippy" was a weiner dog and I remember having a lot of fun with him. I don't know why I'm telling you all this, I'm just enjoying some memories from my youth.

Gramps liked to go fishing and he took us (me and my brother) to the shores of Lake Michigan a few times. I remember a brewer game too but never really had any interest in baseball. Gramps didn't take any shit from us kids and one threat of using his belt on our ass was really all it took to set us straight. That threat didn't come very often, just a few times when we were being a pain. What I really liked about him was that he did small engine repair out of his garage and would let us watch and show us a few things. We were young and for me I soaked up everything I could learn. All those motors were cool and he had a whole garage full of tools that we could look at as long as it was put back where it came from. I wish some of the guys I work with would have been taught that one simple rule. Gramps was tougher than I am. I remember him showing me how he checks for spark on a lawn mower engine. He would just hold the plug wire and pull the cord. If the motor shocked the shit out of him then the ignition was fine. I don't play that game and use a proper tester for that task. 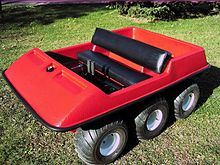 One of grandpas neighbors sold these things called amphicats. I had never seen one before so when this guy showed up at gramps house with one I was excited. We were little kids and had no experience with go karts, mini bikes and the like. This shiny red machine was like nothing I had ever seen and I was thrilled to find out we were going to be taken for a ride. Up and down the street we went. The dude spun the machine around in circles and then raced back down the road. This time we were heading down the dead end that ended in a boat landing to the river. This turned out to be one of the scariest experiences of my life. I knew the machine was called an amphicat but had no idea "amphi" meant amphibious. I was just a little snot nose kid and that word wasn't even in my vocabulary yet. As it became evident we were not stopping for the river I'm sure I let out some kind of scream at a minimum, possibly even shit my pants. We were taught this river was filled with danger and we were about to drive right into it! SPLASH! I'm not a swimmer now so I certainly wasn't a swimmer then and was about to go down with the ship...but the ship wasn't going down. We were floating and under power. Things are a little fuzzy after that and I don't remember details like if we were able to maneuver against the current and come out the same boat landing but I remember a few things, such as the river was kinda scary but obviously not as dangerous as I was led to believe. When Grandma found out she said "Egads and sunburnt fishes"! I had no idea what that meant but she sounded pissed. Grandpa just sat in his lazyboy, sipped his shot of brandy, sucked down a bottle of Blatz beer, tugged on his stinky old cigar and kept his mouth shut. Gramps was pretty cool that way.