A lot of moisture pushed through the state Monday and Tuesday. The weather liars were calling for a half an inch of ice and power outages for our area and people were scrambling. We sold a lot of salt and applied an awful lot to our accounts. By 4:45am  I thought we were caught up and ready for workers to start pulling into parking lots, then it started raining hard. 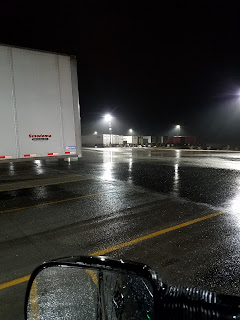 One minute I had these docks melted and wet but temps were below freezing and a few minutes later ice was building up on them. 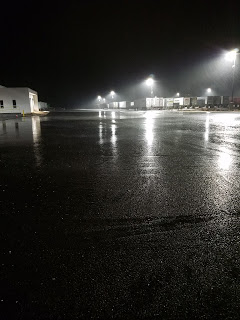 As far as ice storms go, this wasn't much but the roads were treacherous for a while. One coworker claimed it took him an hour to travel about ten miles but he drives a Chevy so that might just be how long it normally takes. Bazinga!
Of course when you have ice build up on trees you get some interesting looks. These trees looked cool enough for me to stop and take a pic. If you squint just right that bright light in the background almost looks like the moon. Squint harder and those storage silos look like a majestic mountain range. Keep squinting and those trucks look like grazing cattle along the edge of a river. Go ahead, most of my pics require some sort of imagination to make them any good and squinting at this one is the closest thing I have to a bike ride out west. Ya, I'm ready for spring. 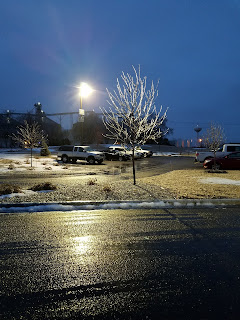