Yesterday was my birthday. Its funny how when I was a kid that day would never sneak up on me. A month out I knew it was coming and there would be talk of what kids to invite to the party. A week out and everyday would be filled with anticipation. The night before and I wouldn't sleep well. When I was a kid I would strut around like a king on my birthday even though the event wasn't handled much different than anyone elses special day. There would be a gift, a small party, and of course a cake. I suppose I got to make dinner suggestions as well. How have things changed? Well, the "gift" was going out and buying myself a new pair of work boots. The "party" was me and my wife stopping for dinner after the boot buying experience and the "cake" is a slice of cheese cake that still sits in the fridge because I was too full to eat it last night. Except for the fact the the day did sneak up on me, it was just as special as when I was a kid but it didn't start out that way. 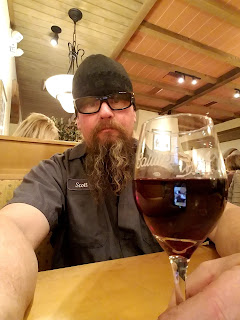 I put my socks on and each one had a big hole in the toe. There isn't much more annoying feeling than a big toe sticking part way out of a hole in a sock. I put my pants on and the main button broke off. I guess its gonna be one of those days. I got a few miles out of town and had to turn around and head back home to get my phone. Grrr.
That was the end of the stupid stuff happening to me and the rest of the day went fine. At the shoe store I was showing my wife how I have a wedge under one heel to align my back and we needed to find a boot that would allow my to install that and keep it comfortable. When I reached in my old boot, I pulled out a chunk of metal. It was about two inches long and very rusty. That would explain the discomfort I had been experiencing but I wasn't surprised as I had found a big chunk of plastic in that same boot just days earlier. They were falling apart from the inside rather than the sole cracking like normally happens to me. I think some water sat in there cuz I don't really have a sweaty foot problem.

New boots need a little break in time to get comfortable but heres a little secret. Wear the old boots until rusty chunks of metal occasionally poke the bottom of your foot and pieces of plastic break off and roll around in the boot. Then when you put your new stiff boots on they'll feel like heaven because none of those irritations exist. 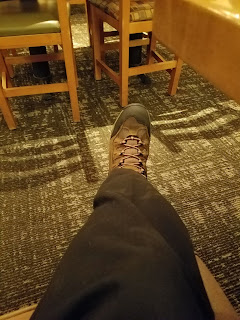 Now heres another tip for you. The weather has been nice for the last few days and a few bikers have snuck out for rides. The sun is low on both the ride in and home from work so be extra cautious because they can be hard to spot sometimes. 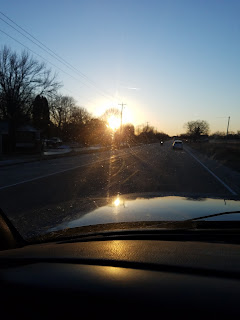