A long time ago when my Grandpa passed away, I received his old table saw. Its a Shopmaster brand made in Minnesota a very long time ago. Shopmaster was in business from the late 40's to 1970. I remember Grandpa saying he built his house using this saw but the more I think about it I probably remember that wrong. I think he bought the house and then about doubled its size with an addition. He would have used the saw for that addition and I guess that gives the saw a birthday in the early fifties, maybe a bit later. No matter, its old for a home owner power tool. 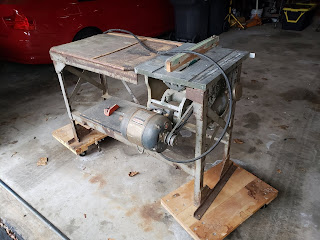 The actual Shopmaster saw is a tabletop unit. All that framework and wooden top are an addition Grandpa made to more easily cut sheets of plywood. Its heavy. That huge motor is only 3/4 horse so you know its old school.
Over the years I've used this saw and struggled with it. The fence guide rail is bent and the added deck no longer sits flush with the table top. 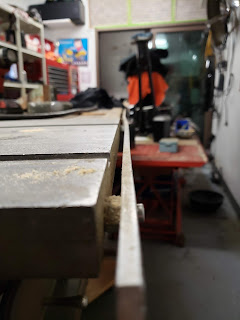 I also had some belt slippage problems. I thought it would be nice to just buy a decent saw but how many table saw projects with I really have? Turns out more than I ever figured and I just kept fighting this saw. If I replaced it today it would cost about $160 for a benchtop unit with no extended table. Recently I decided if I can refurbish this one for under that amount I'd be happier than replacing it. The first step is to tear it down and see what I'm dealing with. 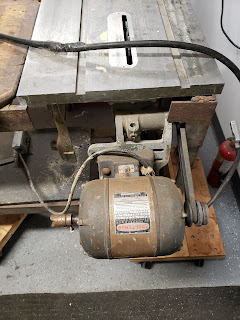 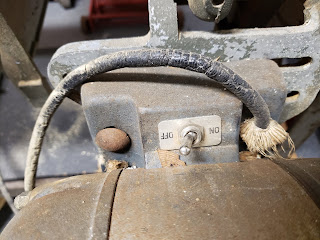 This old Craftsman motor still runs fine but the wiring is all cracked. In fact I found a few spots where there was arcing. I knew the wiring was bad but didn't know I was that close to blowing a fuse. Ya, my garage still uses fuses. 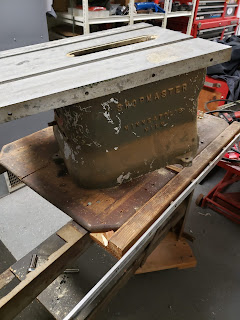 This is the Shopmaster removed from the framework that Grandpa made. 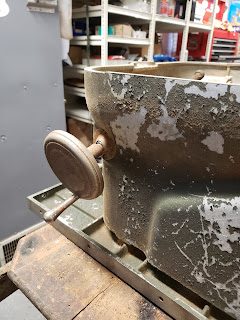 Patina? If I don't run into any broken parts that can't be replaced then it will get cleaned and painted. 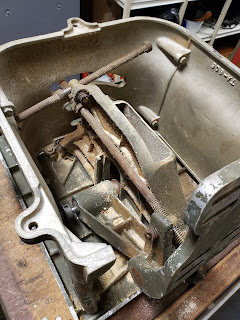 Underneath everything looks like it held up well over the years. It really just needs cleaning and lube. 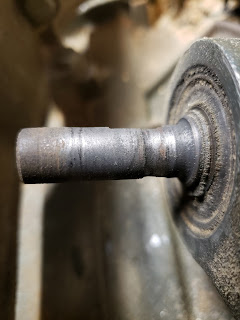 I found my "belt slipping" problem. Turns out the driven pulley on the saw arbor was slipping and ruined that shaft. I'll take it to a local machinist and see if he can bring it back to spec. I saw an old ad for these saws and it claimed to have "sealed for life" bearings. They still feel great but I might replace them if closer inspection shows any seal degradation. 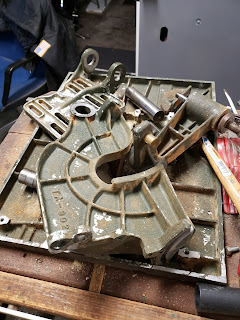 This is where it sits for now. Once I'm sure the arbor can be saved I'll move forward with cleaning the rest of the pieces. Yes I could slap it together and run it but maybe if I do it right the saw will run another 60 or 70 years.