It seems I've been designated our official snow plow/salter controller mount fabricator dude at work. Thats fine, I enjoy the challenge. What I'm talking about are the control boxes for truck salters and back blades. These units typically are mounted on or under the dash or sometimes strapped to the middle seat. I hate that. The dash of most vehicles doesn't offer a decent spot for these things and usually if you do find a spot then its a bit of an odd reach. Controllers that are strapped to a seat tend to move around. This means you don't develop muscle memory for finding the function you want when you need it in a hurry. I like attaching my mounts directly to the seat either at the frame underneath or sometimes at the head rest. If the truck has a middle seat with a head rest then I remove the head rest and put a couple of rods in its place and make a mount from there. With the seat folded forward this gives you an arm rest with your hand just in the right place over the controllers. The seat will have to remain in this down position for the entire winter season.
For vehicles that don't have a middle seat and head rest I like to make a bracket that comes up from the front bottom framework of the seat. Usually this involves unbolting the seat and tipping it back to allow for drilling. This is a lot easier than it sounds. This truck will need a back blade controller and a salter controller. The operator has the nic name "Hammer" so I made this one a little stiffer than some of the ones I've done in the past. 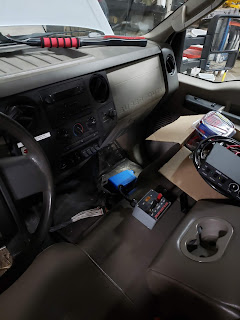 That grey box and the black one sitting in the cardboard box need to get mounted. 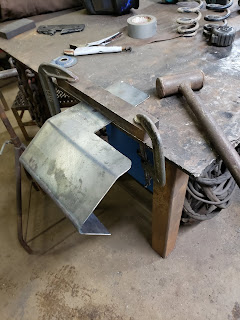 I've done this with straps in the past but decided on a larger one piece design for Hammers truck. 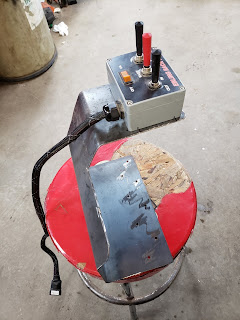 This is the mount and the back blade controller. Notice the bottom of the mount has provisions for eight sheet metal screws. Those get fastened right up into the seat frame from the bottom. 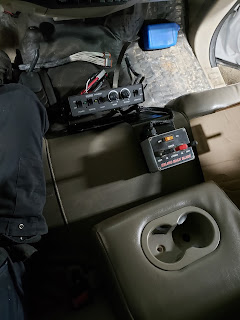 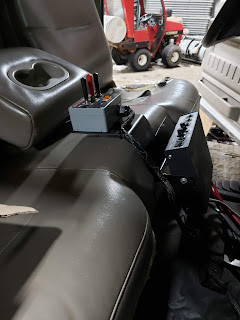 This is a work truck with a back seat. Nobody will ever need to sit in that middle seat so making this kinda permanent is no big deal. If it were for a customer then we'd discuss options ahead of time. The nice thing about this setup is that it moves with the seat so the reach never changes.
In the summer this truck will get a dump body and my bracket is large enough to accommodate that controller. There is also enough room to add switches for lighting or even a pre-wet system for the salter. Otherwise, that a wrap.