Below is the description of the storage case rack I built for my tool cabinet. If that doesn't sound interesting then go ahead and scroll down to the video link. I know, right. A written post AND a video. How spoiled are you?

This project is a continuation of the 3rd level tool cabinet build that has been the focus of this blog for quite a while now. I had a bunch of these storage boxes that I bought from Harbor Freight and they seem durable enough that building a rack for them is justified. They had been taking up valuable real estate in my side locker and I felt they would be better in the cabinet. The trays could then be stored flat rather than on their ends like in the locker. 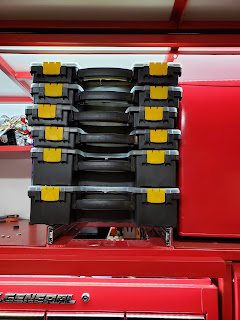 The above pic is the trays I want to build a rack for. If you squint just right you can see that there is no floor under these trays. This is to allow access into the top of the 26" box directly below it. Putting a cabinet above that box meant the lid would no longer open and I didn't want to completely abandon the space.

The other thing you'll eventually notice is that the trays won't be oriented this way after the rack is done. I was just testing what configuration of big and small trays fit in this space. 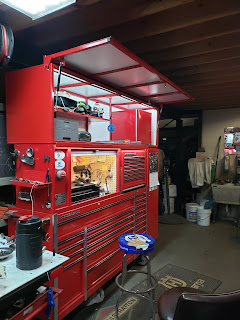 The above pic is how the day started out with just the slide rails in place. Below I'm fastening slide rails to pieces of wood that will be the side of the sliding rack. Thanks to uncle Tommy for the big ass jar of screws. 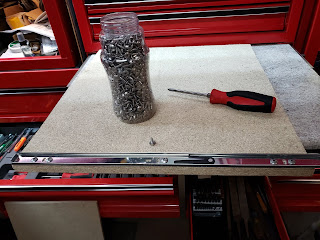 More of the rack being built. I'm no carpenter so this thing just got screwed together the best I could using another big ass jar of screws from uncle Tommy. 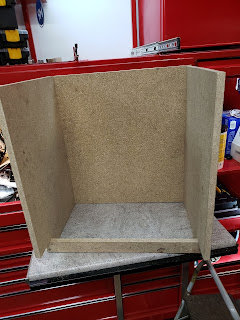 If you would have asked me to draw a sketch at the start of this project, this box would not have looked anything like that sketch. I really gave very little thought to placement of slides or the size of the trays except to leave enough room for the mini fridge. 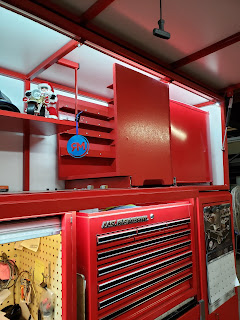 Those angle iron tray holders were originally gonna be 1/4" panels dado cut into the sides. Again, the carpenter in me got pushed to the side by the guy that would rather deal in steel, although I must have watched just enough of Bob Vila to cut that notch in the front to serve as a pull handle. 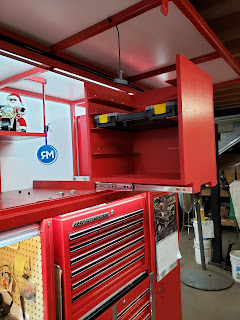 So there it is. The rack slides out allowing easy access the the trays and also exposing the void in the floor for gaining access to the top of the 26" box. Yes I could have just stacked these things in the cabinet but they fit better in this space being sideways. 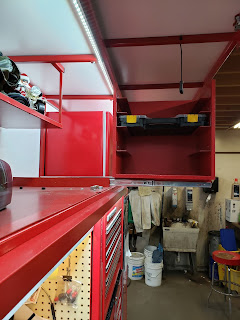 I hate waiting for paint to dry and its still wet in this pic. Thats why I only have one tray in it for the pic but I've since loaded it down with heavy trays and the rack works well. So to sum it up I feel good about the way this turned out. It meets the goals I set and it also offers some other possibilities like hanging clip boards on the side next to the fridge or using the space created under the rack. I'm thinking magnetic rails on the bottom of the rack for holding tools or maybe something else. I'll keep you posted.

Email ThisBlogThis!Share to TwitterShare to FacebookShare to Pinterest
Labels: tools