No the cat didn't walk across the keyboard when I was typing the title to this post. I knew I had to go back to work this past Monday and had last weekend to finish up some Do It Yourself projects As Soon As Possible before 60 hour work weeks consumed all my energy.
The weather over the weekend was beautiful and would have been perfect for an extended bike ride. I spent a lot of time outside on a ladder and heard bikes the whole time. As much as I wanted to throw my paint brush in the garbage and hop on the bike, I also wanted to get some things off my honey do list. I have a metal roof with a few lower sections that I can reach with a ladder. Those got scraped and a coat of aluminized asphalt was slapped on. Don't be fooled by the friendly shiny appearance of that aluminum paint. Its frickin tar with sprinkles added. I got a bunch on my arms and had a hell of a time getting it off. 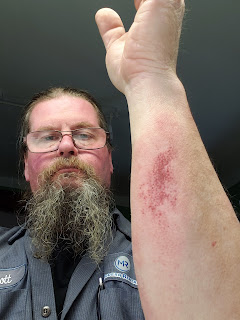 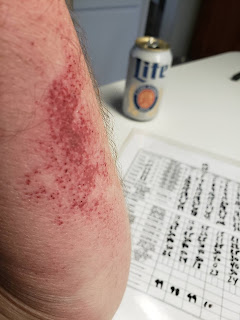 Basically I gave myself road rash on both arms trying to remove the stuff. OK maybe the use of a magic eraser and mineral spirits wasn't the best idea but it did finally come off. At first everything was fine with just some tingling but later my arms turned red like this and blistered in a few spots. If you're mumbling "this guys a dumbass" you are correct but my time machine is in for maintenance so I'll just deal with it. Oh, and if I could go back in time I'd wear a hat last weekend. The sun burnt my scalp pretty bad and it hurts worse than my arms. Must not be as much natural protection up there as there once was.
Also on the list was replacing my garage doors. I talked about it a bit in the last video and completed the job over the weekend. I really like my new garage doors. Is that weird? I don't mean that I just like them, I mean they make me very happy. I was thinking a lot about why I felt so good having installed these doors and it finally came to me. Its all about childhood memories. When we were wee tykes our bikes were parked in the garage overnight. That garage had the biggest, heaviest, off center wonky piece of shit garage door I've ever seen to this day. To me it was a monster and I hated it. Our bikes were trapped inside and just on the other side of that door was a summer adventure. We needed to get out and pop wheelies, lay skid marks and do our best Evel Knievel impressions. Unfortunately none of that could happen until Mom or Dad opened the door for us because we didn't have the strength or height to do it. The absolute worst disaster was when the door would come off the track and Mom would declare the entire area off limits until dad got home to fix it. On those days we would climb trees, build forts and shoot bb guns. Anyway, I remember one of our friends had an electric garage door opener and I was fascinated by it. I think I somehow knew that some day I'd have a decent garage door with opener and now I have two. I love that something so simple makes me so happy. I should have replaced those doors years ago.

Also on the list was replacing the front storm door. We got one that has the screen rolled up in the top so when the upper window is pulled down the screen follows. Very cool idea, I just hope it holds up. I also got a first coat of paint on the outside of the inner door. 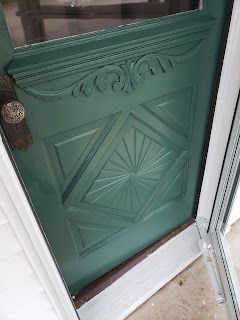 I know this is an old door and always thought it was unique. Turns out friends of ours have two of the same door. Craziness I tell you.
Lets see...what else did I accomplish? Well, I rerouted some of Mowbys boundary wire. He has a tight area in the front yard all beat to shit because of a long high tree root. This root has also caused him to slip over the curb into the street on a few occasions so I decided I'll just keep him out of there and trim that little section myself. A small price to pay considering he does all the rest of the lawn mowing and I have to trim near that area anyway. 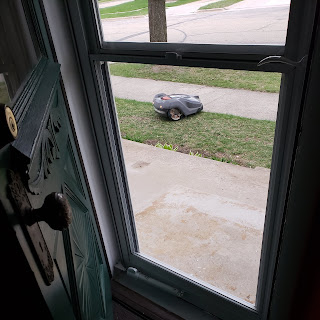 Finally I also started doing a little work on our front porch. An old piece of astro turf was pulled up. The adhesive still needs to be dealt with. The porch posts will get replaced and I even removed one of them to get a better idea of what I have to deal with. Some old paint was scraped and some new paint was applied. Not too much, mind you, just enough to make it look like I've been keeping busy.

Email ThisBlogThis!Share to TwitterShare to FacebookShare to Pinterest
Labels: DIY