It was thirteen years ago...

October 8th, 2000 was a cool evening here in Wisconsin. I needed some parts for a bike and the shop that had them was 45 miles down the road. They are open late on thursdays so I bundled up in my Carhartts and headed out right after work.
I made it to the dealer, got my parts, and wasted some time looking at bikes in the showroom. The ride back was in the dark. No big deal. I have always said that if you don't ride at night you're missing out on half a day of riding.
There is a small town I had to pass through where the speed limit drops to 35 so naturally I was traveling 45 or so. BLAMO!  Just that fast a deer crossed my path and I hit it hard. All that time spent on deer avoidance and emergency maneuvers and somehow I still  end up a victim of a forest rat.
The bars were yanked from my grasp as the front wheel was pinned all the way to one side. As I was being ejected from the bike, my ribs caught the bar end. This resulted in five ribs broken in eight places along with a punctured lung. When I hit the road I landed shoulder first. This earned me a broken collar bone. Naturally I rolled a few times and this got me a bit of road rash on my knees. I also banged my helmeted head on the road a few times. I didn't always wear a helmet but did on this ride because it was so cold. Based on the scrapes on the helmet it seems obvious it saved me a great deal of pain or even a worse fate. No politics here, just the facts.


I remember sitting in the road trying to catch my breath. My head was swimming in a daze but I remember someone telling me to get my ass out of the road or I was gonna get run over. Whatever. I wasn't gettin up without some help. As it turns out a cop was on the scene right away and blocked traffic. There was an ambulance ride to the hospital where a mean doctor cut my new jacket off of me. I was laid up for a week in the hospital and went to work the following week. 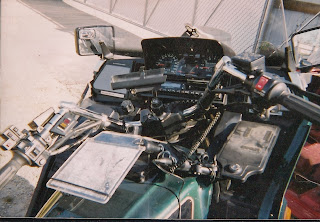 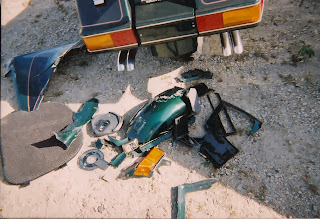 The following season after the bike was fixed and I had recovered, my wife and I went on a ride. It was early evening and a couple of deer crossed our path. It wasn't a close call but it was close enough that while I was on the brakes all I could hear through the intercom was my wife praying. That was her last bike ride. She explained that one of us needed to live and raise the children. Fair enough.
I went on to total 76,000 miles on this bike before selling it. I didn't need a big rig if I was gonna be riding solo.
Its amazing how many people will look at an event like this and just assume you are done riding. Yes, some people will be freaked out and have a hard time throwing a leg back over a bike. I submit to you that those people were never as passionate about riding as the ones that get back on. I admit to being freaked out myself a few times. Its ok. You would have to be numb from the neck up not to get a little excited after a near miss. In fact, in the years following the crash I became a "dress for the crash" nazi. I bought all the gear that I never had. Jackets, pants even under pants with pads and armor. Its been 13 years since this crash and I find myself easing off the obsession of wearing all the gear. I know that this carelessness could bite me in the ass but whats the point of riding if its not enjoyable. Lately I find myself dressing more for comfort than protection.

Evel Knievel was my childhood hero. He broke 433 bones before he hung it up. It seems kinda wuss-like to quit after just nine broken bones.
Posted by Scott Seidl at 3:51 PM