I've been riding to work more this year than years past. I no longer have a company truck to deal with or anyone to pick up on the way in. A lot of times on the flip side I have to stop at potential customers homes and give estimates for lawn work or pesticide applications. With modern technology and smart phones I can do all my measuring online and not even have to carry a measuring wheel. This means I can travel light and ride a bike.
Its been cold in the mornings lately. Not freezing yet but in the 40's. The ride in is 20 miles so if I don't dress right it can get a bit uncomfortable. My routine includes checking the radar but the deciding factor as to whether or not I ride is mostly based on my gut instinct. I open the garage door, step out and take a deep breath, then decide. I almost always decide to ride.
Lately I've been choosing the sportster if I don't have too much to haul. Partly because I want to work the bugs out but mostly because its a fun bike to ride. Everything on that bike is exaggerated. The solid mount engine transfers a lot of vibes. Not so much that its hand numbing but just enough to give it character. The brakes require a lot more input than other bikes I've been on lately. Despite the name Sportster it's really not a sport bike. What it lacks in performance features it sure makes up for in character.  In the past I've added a windshield to many of my bikes because it just makes commuting more practical. I'm not going to do that with the Sportster. I like the connection between me and the environment. As I travel down the road every little terrain feature offers a little bit different sensation. I may ride through a cool cloud of fog that messes up my face shield or come up over a rise that offers a welcome few degrees increase in temperature. I also feel more connected when I can smell what's going on around me. Sure most of the smells are not that good like something coming from a dairy farm or some rotting carcass laying in the road. Maybe even the smell of my boot burning on the header pipe. But not all the smells are bad smells. Maybe I'll catch a whiff of mint or a fresh cut lawn or farm field.
The wild life is active at this time in the morning. When I leave the house its dark but as I get out on the highway and things open up, I am treated to pre-dawn light in the horizon. This makes it easy to see bats flying around heading back to their daytime shelter. They look like they're flying drunk. I often wonder how these things can land without crashing. Of course I see a lot of deer feeding in the fields. These forest rats don't interest me. I don't see many racoons on my ride, but I do see evidence of them by the occasional carcass in the road. There is always some stupid bird feeding on these that sees me coming but won't fly out of the way until the last second. Those rotting carcasses must be really tasty.
On some days there will be clouds on the horizon blocking out the morning light. Once in a while these dark clouds can play tricks with the mind. They can mimic a mountain range that I know isn't there. When I see these pseudo mountains I am reminded of some fun times I've had riding the Rockies and Smokies. The whole event lasts only a few seconds before something else occupies my thoughts.
Its funny that a person would choose a little discomfort, like that cold air blowing up a pant leg or the numb fingers and rosey cheeks brought on by the same cold air, over the warmth of a car. Sitting in a cage is a boring task. It doesn't offer the same experience as on a bike. Yes, there are times when its more convenient or necessary but given a choice I'd take a chilly bike ride over a warm car ride. For those of you that ride I'm not telling you anything new. For those that don't, Its hard to explain. I've owned convertible cars. Its not just being exposed to the environment but more like being one with it. Part of it may be the performance factor of a bike vs car but for me its not a power trip. In fact I get just as much enjoyment from smaller bikes as I do from the more powerful ones. 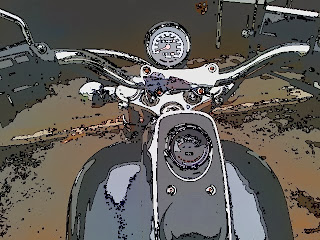 Now I've laid it out for you but guess what. Its 6 am as I write this line of text. I'm sitting in my shop preparing to leave for work. Today I won't even walk outside to make the decision because I can hear the rain pounding on the roof. Its 49 degrees and I've enjoyed many rides under these conditions but those days usually end at home or a motel room where I can get dry and comfortable afterwards. I'd rather not spend the day at work wet and miserable. Hey, I like to ride but I'm not psycho about it.
Posted by Scott Seidl at 8:49 PM