For the past dozen years or so I have been vacationing in the Smokey mountains. The truth is that it started as a group gathering with some strangers that have become close friends. We've scraped pegs and dragged hard parts on all the regular touristy roads in the area but some of the best times have been exploring the lesser known roads .  On one such adventure we rode up on the scene of a crash. It's not unusual to see a single bike crash. Someone pushes it too hard, a corner comes up too fast, crap in the road, whatever. This crash was just a bit different. 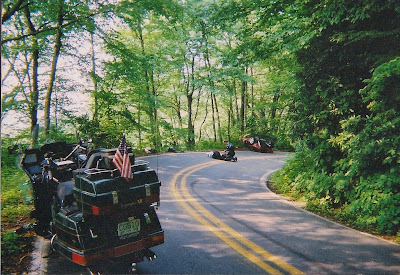 There was a rider laying in the road being attended to by another rider. The victim never spoke a word but he sure was making a lot of noise. Help was on the way so we decided to split up and pull road guard duties. It didn't take long for a state trooper to arrive. He wasn't able to do anything for the crash victim and he wasn't able to get any info from him either. It looked like he locked up a brake and lost control. He was ejected and the bike flipped. You could follow the skid marks just about to the point he was laying and then follow the scratches in the road to his bike. The poor guy crashed on the first turn and never got to the good stuff.
I could hear the ambulance coming up the mountain. It took forever. There was a reason we were on this road. Its steep and winding. I felt guilty because I just wanted the medics to give this guy some relief and get him to stop that screaming and moaning.
As I'm standing there along side the road waiting I had noticed a lot of gouges in the asphalt. I was trying to imagine how they got there. This was probably the steepest, sharpest corner I have ever experienced so I just assumed some vehicles without much ground clearance must be scraping here. As the ambulance arrived I watched as the front and rear bumpers were scraping the ground at the same time! We have some fun roads in Wisconsin but nothing this steep.
The emt's were having a tough time with this guy. His bike was upside down and wadded up against a tree but you could still tell it was a specially set up rig for someone disabled. They didn't know what was previously screwed up and what may have occurred in the crash. They thought he was paralyzed from the waist down but weren't sure. They carefully strapped him to a board, loaded him in the meat wagon and headed down the mountain.
I have no idea how this story ended for our victim. If I hope he made a full recovery then the best he can be is still disabled. Anybody willing to invest in a specialty lay down rig operated solely by hand controls must be passionate about riding. If he didn't make it we at least know he went out doing something he enjoyed.
That seems like a morbid way to end this story so I'll add this thought. I've seen some riders with only one arm or leg on bikes set up for them. These guys always seem to be some of the best riders I've met. I know if I were in that situation I would want to figure out a way to keep riding. Some times I wonder If I'll be too old and weak to hold a bike up and end up on a trike or scooter. No matter. I'm not hung up on brands or certain types of bikes. Its all good as long as you can get out there and enjoy the open road or maybe even ride away from a few scrapes left in the asphalt.
Posted by Scott Seidl at 7:54 PM